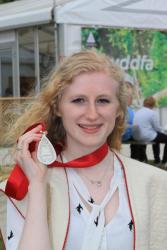 Congratulations to School of Welsh graduate, Ffion Haf Williams, who won the Drama Medal at the Caerphilly and District Urdd National Eisteddfod 2015 for a play that she wrote during her third year at Bangor as part of her Scripting module.

Ffion, from Pembrokshire is studying a master’s degree in Celtic Studies, with a focus on Welsh mythology at Jesus College, Oxford. Her challenge at the Eisteddfod was to write a one-act stage play taking no more than 40 – 60 minutes to perform.  Ffion competed under the nom de plume Liszt with a piece of work called Libersträume, which examines the relationship between a piano teacher and his pupil.

Adjudicators, Elen Bowman and Dafydd James, said Ffion is a “mature, theatrical dramatist who understands the craft” and who “fully deserves the Medal in a strong competition.”

Dafydd James says:  “This is the competition’s most complete play.  Ffion understands what it is to combine narrative, characterisation, dialogue, music and form to create a convincing work that could be performed on the stage today.  She knows what it is to reveal dramatic information in a subtle way and we were totally mesmerised by the ambiguity of the central relationship.  It was also good to hear the West Walian accent and the use of music and the piano was masterly.

“There is a sense that Ffion is playing with the forms of comedy, melodrama and tragedy; this could be pushed further.  This is a masterly play that leads to a lovely, melancholy and genuine denoument.”

This year, 13 entries were received and the adjudicators were delighted with the standard of the competition.

Elen Bowman adds: “The drama form is complex to master and dramatists don’t usually mature as quickly as writers and poets.  They have to consider, among other things, multi-layered characters, conflict, subtext and subtlety, dramatic tension, narrative structure, development and climax, and on top of all that the script has to entertain a live audience!

“We’re both excited at the thought of the future of Welsh language drama following this competition.”

Congratulations also to Gareth Evans-Jones a research student at the School of Welsh at Bangor for coming third in the same competition.

Students from the School of Welsh have an excellent track record in this competition. In 2012, Llyr Titus Hughes was the winner, in 2011 Elin Gwyn and in 2010 and 2007 it was won by Manon Wyn Williams who’s now a Lecturer in Scriptwriting and Drama at the School of Welsh.