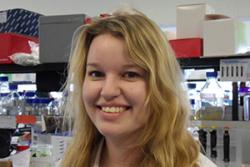 Victoria Hilditch in the Cancer Research Laboratory at Bangor UniversityA long standing enigma in cancer biology is how the cell growth regulator Cdc2 can be active and inactive at the same time. Human cells stop dividing in the presence of genetic damage by inactivating Cdc2, but they also need active Cdc2 to remove the genomic defects.

Dr Thomas Caspari explains: “Many cancers start when genomic alterations are not faithfully repaired. Victoria`s discovery of seven different forms of Cdc2 unlocked the puzzle of how this growth promoting enzyme can be active and inactive at the same time. These seven forms differ in their modification pattern which allows cells to employ them in opposing ways.

“While some modifications draft the enzyme to regulate cell growth, others recruit it to the repair machinery. This is a breakthrough finding since the Cdc2 enzyme is miss-regulated in many cancers which accumulate DNA damage. Victoria`s work illustrates the benefits of research-informed teaching at the School of Medical Sciences.”

Victoria added: “A major part of my final year project was spending time in a cancer research lab, which was a fantastic opportunity to learn new skills and to see how fully operational laboratories function. I highly enjoyed this aspect of my final year here at Bangor University, especially so when I stumbled across an unexpected result which showed the many different forms of Cdc2 based on their unique phosphorylation patterns.”

Victoria`s work has now been published in the high impact, open access journal PLOS ONE (