Aimee Anthony and Dawn OwenHaving become the first University to introduce an MSc qualification in Applied Behaviour Analysis (ABA) in Europe in 2003, a student at Bangor University’s School of Psychology following the ABA MSc, has become the first Masters students at the School to submit a Master’s thesis written in Welsh. Applied behavioural science focuses on the use of basic learning principles to develop positive behaviour change for individuals, groups of people, and society at large.

Two students, Dawn Owen and Aimee Anthony, were awarded a prestigious Welsh Medium Bursary funded by the School of Psychology, in 2011. Both have now completed their qualifications and have gained employment in local educational settings operating through the medium of Welsh.

ABA practitioners often work with children who have additional learning needs and can be found working in both mainstream and special educational settings. The main aim of the ABA MSc Welsh Bursary Scheme is to contribute to developing skilled behaviour analysts who are able to gain employment working locally through the medium of both Welsh and English.

The ability to practice clinically in both languages is crucially important in North West Wales where census figures (2011) indicate that 66% of the population are Welsh speakers. Additionally, 98% of schools in Gwynedd deliver bilingual education. 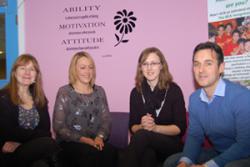 Aimee Anthony and Dawn Owen called in at the School of Psychology to visit Dr Elin Walker Jones and Dr Carl Hughes following their first term as practitioners working at local schools.Dawn Owen, a fluent Welsh speaker, wanted to develop her literary skills in Welsh, and her ability to practice and discuss her academic subject in Welsh. Aimee Anthony, a Welsh learner, also wanted to develop her verbal skills and confidence with speaking and discussing her subject in Welsh.  In addition to the normal classes and assignments, both were required to attend a series of Welsh medium seminars, and present their research projects at the IV Annual ABA Bangor conference through the medium of Welsh.  Dawn Owens attended the “Ymdrin â’ch pwnc drwy gyfrwng y Gymraeg” (Improving your written Welsh) module run by Canolfan Bedwyr at Bangor University, and wrote her Master’s thesis in Welsh.

Dawn comments: ''The Welsh Bursary was an opportunity for me to improve my written and spoken Welsh.  The Bursary element of the course was hard work, but incredibly valuable. I’m glad that I have had the opportunity t o write and complete my thesis in Welsh. I must emphasize the hard work done by the University’s lecturers. I am now working as an ABA therapist in Ysgol Syr Hugh Owen a secondary school in Caernarfon.”

Aimee Anthony attended a class for Welsh learners to develop her spoken Welsh skills. Aimee comments: ‘It was difficult with the extra work, but it was worth the extra effort, with all the support that I received. I wouldn’t have the confidence to try for an ABA position, as I felt that my Welsh was not sufficiently good, but by now, I’m working using ABA in Ysgol y Garnedd, a local Welsh medium primary school. This would not have been possible without the bursary.”

Dr Carl Hughes, the director of the MSc course, comments: “Although the Bangor MSc course has students attending from all over Europe, and further, we have retained a distinctive focus on developing local collaborations, and in particular supporting projects in Welsh medium settings. One of our aims has always been to help local services and impact people in this area. It is refreshing to see local home grown talent being developed not only following the latest evidence based practice but also doing this through Welsh.”

Dr Elin Walker Jones, who founded the Welsh medium tutor programme on the ABA course, comments: “Being able to support students to increase their fluency in Welsh is an important achievement for the ABA course.  It has important repercussions for increasing competencies in the local workforce in terms of producing employees who are skilled behaviour analysts, competent to work with children, young people and adults in the medium of both Welsh and English.”

The ABA MSc Welsh Bursary scheme is working in collaboration with and was inspired by the vision of the Coleg Cenedlaethol Cymraeg to develop the capacity for Welsh medium education that contributes to skilling up and enabling local people to work at a high level through Welsh.