Forget Jon Snow, watch the young women to find out how Game of Thrones ends

This article by Raluca Radulescu, Professor of Medieval Literature and English Literature, Bangor University was originally published on The Conversation. Read the original article.

Sky Atlantic/©2017 Home Box Office, IncFor Game of Thrones fans, the current series has been a bit of a mystery. As the television writers have picked up the storyline where author George R. R. Martin’s A Song of Fire and Ice novels ended, there is, for the first time, no original text to refer back to.

Much virtual ink has been spilled recently over the role of the female characters in the political struggle, yet one of the most crucial themes of this series is going largely undiscussed: the role of children, particularly young girls.

The children of Game of Thrones might form the thick-woven fabric of the tapestry we have been watching, but they have not really taken centre stage. There were little nods in past episodes towards the vital importance of the children in Game of Thrones: take the little orphans of King’s Landing, for example, who killed Grand Maester Pycelle of the Citadel – a rather more unusual turn of the plot. Later episodes have been more obvious about the power of children, but it is only now that the series is being so explicit about it.

The latest episode to air, episode six, lays the central role of children and young people on a little more thickly. Without giving too much away, the struggle between Sansa and Arya, the Stark sisters, seemingly 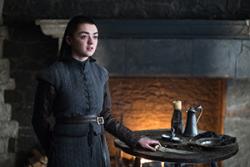 Arya Stark: Sky Atlantic/©2017 Home Box Office, Inccomes to a head, while a shocking event involving Daenerys Targaryen causes her once more to tearfully utter the phrase “they are my children”, while telling Jon Snow that she is unable to bear a child of her own. We have also recently heard that current queen of the Seven Kingdoms Cersei is pregnant once more with a new heir to the Lannister line.

Seen but not heard

From the start of the series, and indeed Martin’s novels, the struggle over dictating the future of the Seven Kingdoms has been very similar to that during the real-life Wars of the Roses. Cersei’s naked ambition and her son Joffrey’s stark cruelty (puns intended) remind of Margaret of Anjou. She was the 15th century French queen to the mentally unstable Lancastrian king Henry VI, whose son – allegedly begotten in adultery, though not incest as in Game of Thrones – was Prince Edward.

Like Margaret of Anjou, Cersei uses her reputation – and children – to her advantage. She takes charge of the family fortunes and boldly looks at the future as an opportunity for herself. There’s every chance she’ll don armour at some point, as Queen Margaret herself was rumoured to have done during the Wars of the Roses.

Unlike Margaret, however, Cersei faces a battle with the upcoming dynasties of women. Cersei still believes that she is the most important woman in Westeros, but the younger females we first saw as children have come more into the limelight during this and the last series. Cersei’s power is waning, while other prominent women such as Daenerys, or indeed the young lady Lyanna Mormont – the head of one of the great families of the North – are unafraid to ride into battle. Even Sansa, who Cersei once tried to humiliate and oppress, is now standing in as ruler of the North while her half-brother Jon Snow seemingly prefers his place in the heart of the action. 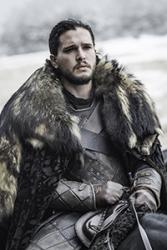 Jon Snow: Sky Atlantic/©2017 Home Box Office, IncSince the first episodes, we have been watching these young women grow and change – but only now is their true significance being made clear. Where once they were shown in the more expected, traditional roles of a medieval female, now they are warriors in their own right. A feisty young Arya has transformed from the lively girl with her sword “needle” to an assassin, a “Faceless Man” trained in the dark arts and haunting Winterfell. Sansa meanwhile has become a different kind of fighter, going from dreams of being a princess to overcoming years of abuse and ultimately emulating her own strong mother, Lady Catlin Stark.

Valar Morghulis: All men must die

Yet Cersei is not that “old” – and potentially still has decades ahead of her to sit on the Iron Throne. If there’s one lesson that can be learned from Lady Olenna of House Tyrell – the wise older woman who tells Daenerys she has survived many powerful men – it is that even when women are no longer young and the focus of attention, they still have some influence to wield. Cersei may have lost her first three children – and the control she had in using them as pawns to her game – but her new pregnancy could very well serve to change that once more.

Ultimately lineages are the most important factor in winning the game of thrones – and it could very well be that Cersei’s new child grows to fight a ruling Daenerys, who, as of episode seven, had not yet named an heir to her throne.

As the battle focuses between the two – or three, if you count Sansa – queens, it has never been more clear that the young female combatants are now far more relevant than the adult male leaders – most of whom have been killed off. As children these women signalled change in dynastic struggles – but now they are grown up, they are heralding a second echelon of much wiser, perhaps untainted rulers: theirs is the future of Westeros.