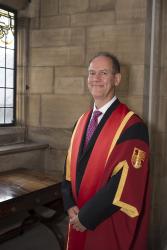 Mr Hepburn, who graduated from Bangor Business School with a degree in Banking and Finance in 1983, was awarded the honour in recognition of services to public life.

Since graduating from Bangor, Mr Hepburn has enjoyed a varied career in finance and general management. For six years he was Chief Operating Officer at Downing Street before moving to his current role as British Consul General in Washington DC.

An Honorary Fellowship is the highest honour that the University can bestow and is usually awarded to individuals with a connection to the University or to Wales.

“Throughout his illustrious career following graduation, he has retained close links with Bangor”, said Emeritus Professor Ted Gardener, formerly Head of Bangor Business School. “He has always been happy to return and give talks to students, and to help us with alumni and other important events. As the former Head of School, I saw Eric not only as a friend, but also as a rock that we could rely upon for strong support and good advice.”