A new translation of a Welsh novel by Professor Jerry Hunter sheds light on a largely forgotten episode of the English Civil War – and of Welsh history – when troops from Cromwell’s New Model Army, mistaking them for Irish Catholics, massacred over a hundred Welsh women in the immediate aftermath of the Battle of Naseby in 1645. 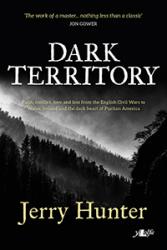 Dark Territory is an English translation of Y Fro Dywyll, published in Welsh in 2014 to rave reviews by critics and readers alike. The novel’s protagonist, Rhisiart Dafydd, is a zealous Welsh Puritan whose beliefs initially lead him to embrace Parliament’s cause and the violence of Cromwell’s New Model Army, but whose conviction is tested by these atrocities. This internal conflict comes to a head as Dafydd is sent to the New World to seek out a colony of Welsh Puritans with whom contact has been lost over a number of years.

Described as ‘an epic historical adventure set during one of the most turbulent periods in history’, the novel also poses questions about violence, power, religious extremism and rejection of difference which are chillingly relevant to our world today.

‘With this novel I also wanted to cross-examine the ideological foundations of “American Exceptionalism”,’ Professor Hunter explained. ‘For centuries politicians in the USA have referred to the nation as a “shining light” for the rest of the world to follow. Through the prism of fiction, this work examines the dark realities at the foundations of those beliefs.’

‘Particularly now in the age of Trump, when the old myths of exceptionalism are being invoked once again in an attempt to “make America great again”,’ he added.

Born in Ohio, Professor Jerry Hunter is Professor of Welsh and Pro Vice-Chancellor (Welsh Medium and Civic Engagement) at Bangor University and in addition to his academic publications on Welsh literature and the Welsh-American experience, he has also ventured into the world of fiction, winning the Prose Medal for his debut novel at the National Eisteddfod in 2010.

Dark Territory has been translated into English by Professor Patrick K. Ford of Harvard University’s Celtic Department. Professor Ford is himself an international authority on Celtic literature and his translation of Y Mabinogion has been in print for over 40 years.