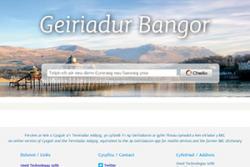 The BBC’s Welsh English dictionary is back in its new incarnation!

When the BBC’s dictionary was taken down from the web due to the retirement of its old software, a number of people were sad to lose it. Although there are now a number of other on-line Welsh English dictionaries in existence, many users, including Welsh learners, liked its simple, easy to use interface. Its combination of general vocabulary and the latest technical terms was also very popular.

The Language Technologies Unit at Bangor University’s Canolfan Bedwyr, as original creators of the dictionary, were asked if they could reinstate it and publish it on the university’s website.

Dr Llion Jones, Director of Canolfan Bedwyr said, “At a time when the Welsh Government, language planners and supporters of the Welsh language are all agreed that emphasis needs to be placed on increasing use of the Welsh language in both the social and professional context, we hope that the appearance of this dictionary can be viewed as a small contribution towards that aim.”

To celebrate the fact that the university is now taking responsibility for the upkeep of the dictionary, it has been renamed Geiriadur Bangor – the Bangor Dictionary. It will now be available at http://geiriadur.bangor.ac.uk and it is hoped to add new features and material to it in future.