The Department of Modern Languages and Cultures at Bangor University was delighted to host the annual conference of the Association for German Studies in Great Britain and Ireland (AGS)on 29-31 August 2018. The conference brought together approximately 80 German Studies scholars and postgraduate researchers from across the UK, Germany, Austria and the United States, and welcomed panels from Medieval Studies through to contemporary history, literature and film. The lead panel, entitled ‘Anniversary Capital’, investigated the importance of, and growing fascination with, anniversary activity surrounding historical dates, as well as ways in which anniversaries may provide potential ‘hooks’ for German scholars to tap into English-speaking audiences. 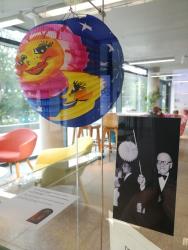 The highlight of the conference was a ‘Multimedia Collage’ by Alexander Kluge, who accepted the invitation to be the President’s Guest at AGS 2018. Kluge, one of Germany’s most prominent intellectual voices, achieved renown in the early 1960s as both a writer and a film director. He was spokesperson and influential filmmaker of the “New German Cinema” of the 1970s, and has received all of Germany’s important prizes for literature, as well as film prizes in Venice, Cannes, and Berlin. At the time of the conference, in fact, he was presenting his new film, Happy Lamento, at the Venice Film Festival.

While Kluge was unable to come to Bangor in person, he collaborated generously in advance of the conference, responding extremely creatively to the theme of ‘Anniversary Capital’. He provided countless minute films and texts, and recorded an interview with Dr Sarah Pogoda (Lecturer in German at Bangor) just weeks before the conference. Given the wealth of materials provided by Kluge, the high-profile President’s Guest event became the launch for a two-week exhibition that introduced Alexander Kluge’s work to a Welsh-speaking audience for the first time. The exhibition and accompanying bilingual booklet are documented on the website ‘Lighthouses into Futurity’ and the video interview (in German) can be viewed on the AGS website.

The conference was also notable for the many panels that interrogated the place and importance of German Studies today, with several explorative round-table discussions examining ways in which the curriculum can be expanded and brought into greater comparative perspective. The plenary ‘schools and networks’ panel also heard from schoolteachers of German, with the aim of strengthening collaboration between the secondary and tertiary sectors. Presentations from the MFL Student Mentoring Schemeand the Think German Networks Initiative, supported by the German Embassy, provided examples of the excellent work that is already taking place within this context.

Dr Anna Saunders, one of the organisers of the conference, said ‘it was a pleasure to host such a lively conference. The varied and thought-provoking panels, together with Alexander Kluge as President’s guest and a good dose of Welsh sunshine provided for an excellent combination.’