Graduate hopes to ease the pain of a bad back 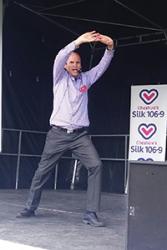 Ned leads a yoga demonstration at a recent event.A Bangor University PhD graduate in Health Economics, Ned Hartfiel, hopes to reduce back pain and sickness absences in the UK through a ‘Healthy Back Programme’ which is being rolled out by his recently established company.

Ned’s research at the University’s College of Health & Behavioural Sciences, address the issue of back pain and sickness absences in the workplace; a problem often exacerbated by the sedentary nature of office working.  Recent figures from the Office for National Statistics suggest that almost 31 million days of work were lost in 2013 due to back, neck and muscle problems, costing the UK economy £14bn a year.

Ned, who is originally from Minnesota, applied for a Tier 1 Graduate Entrepreneurship visa to take the next step forward from his research, and to make a positive contribution to the health and wellbeing of employees in the UK.

His Healthy Back Programme involves weekly sessions in the workplace with qualified instructors which are supported by easy-to-follow online and offline instructional materials.  The programme is evidence-based and tried and tested in three clinical trials.  A recent randomised controlled study showed that employees who practised the programme over a six month period experienced far fewer sickness absence days related to back pain and musculoskeletal conditions.

Having worked with Ned during the trial, Betsi Cadwaladr University Health Board’s Occupational Health and Wellbeing department staff asked for an additional eight week programmes so that more of their staff could benefit. The natural next step for Ned was to start a new company, which he did with the support and coaching available through the B-Enterprising Project at Bangor University. His company is based in Bethesda, North Wales.

Dr Peter Oliver, an independent consultant occupational health physician working in a number of public and private sector organisations in North Wales and Cheshire, commented: “This programme should be available in every workplace.”

‘It offers a simple, easy-to-learn and accessible programme of gentle stretching, strengthening, breathing and relaxation that can be practised by anyone at work or at home. It only requires a yoga or exercise mat and approximately 15 – 20 minutes per day. The programme has also been shown in clinical trials to be both effective and cost-effective’.

The idea for starting up his own business originally came from an entrepreneurship seminar held at Bangor University’s Pontio Arts & Innovation Centre in March 2016 where participants were invited to make a pitch for a potential start-up business.

‘I made a pitch and received favourable feedback from the seminar organisers and facilitators.  Subsequently, I received regular business mentoring via the B-Enterprising team in preparation for my Entrepreneurship Visa Interview in June 2016’.

Ned was also awarded £500 through the Santander Universities Enterprise Mobility Awards which enabled him to travel to London and the Midlands to meet with Occupational Health and Health and Safety Corporate Executives at major hospitals and companies.  These initial face-to-face meetings are, he believes, crucial in building relationships with the decision makers in major firms who will be implementing the Healthy Back Programme.

‘Starting  your own business involves challenges on a continual basis: writing and revising business plans, preparing financial forecasts, choosing business advisers, networking and selling products and services, pricing, bookkeeping, accounting, building a website, hiring people and engaging in social media.  The list goes on and on, and yet it’s an exciting, dynamic and creative process!’

Ned has impressive ambitions for the future:

‘My vision is that the Healthy Back Programme (and new De-stress Programme) will be offered in every NHS organisation and local government in the UK.  In addition, I see these programmes offered in thousands of large private and public companies throughout the world’.

Ned undertook his PhD research at the Centre for Health Economics and Medicines Evaluation (CHEME), now part of the Bangor Institute for Health and Medical Research, and the School of Healthcare Sciences.  His PhD in health economics was funded by Welsh Government through the Welsh Health Economics Support Service (WHESS), part of Health and Care Research Wales, and was supervised by Professor Rhiannon Tudor Edwards Bangor University and Professor Ceri Philips Swansea University.

“Ned’s research showed that yoga can be cost-effective and that there is a strong business case for employers to promote employee wellbeing and prevent absenteeism due to musculo-skeletal complaints.”