When Gwyn Thomas died in April 2016, Wales lost a national treasure. For nearly forty years, he influenced generations of students as a lecturer, professor and head of Welsh at Bangor University. 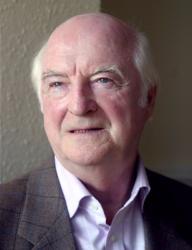 For over half a century, he was one of the leading scholars of his generation and one of Wales’s most prolific, significant and popular poets.

To ensure that Gwyn’s legacy remains alive, we intend to establish a memorial fund to support and reward students from Bangor University’s School of Welsh – the department with which he was identified as a student and scholar throughout most of his professional career – in the varied fields that interested him.

All donations will be gratefully received in memory of a man who left a lasting impression. For whoever wishes to donate, the details of the “Gwyn Thomas Memorial Fund” may be found here.

Professor Gerwyn Wiliams
Head of the School of Welsh