This article by Gregory Frame, Lecturer in Film Studies, School of Creative Industries & Media, Bangor University, was originally published on The Conversation. Read the original article.

John F Kennedy was born 100 years ago on May 29, 1917. While the achievements of his presidency and the content of his character have been subjects of contestation among historians and political commentators since the 1970s, there is little question regarding the enduring power of his image. As the youngest man to win election to the presidency, entering the White House with a beautiful wife and young children in tow, he projected the promise of a new era in American politics and society.

In Norman Mailer’s sprawling, seminal essay about Kennedy, published in Esquire in November 1960, Kennedy was the embodiment of what America wanted to be: young, idealistic, affluent and cosmopolitan. When America was faced with the choice between Kennedy and Richard Nixon in the 1960 presidential election, Mailer posed the question: “Would the nation be brave enough to enlist the romantic dream of itself, would it vote for the image in the mirror of its unconscious” – or would it opt for “the stability of the mediocre”?

Kennedy knew the importance of his image, which is why he placed so much emphasis on his performances in the televised debates. His success in this arena arguably tipped the very close election in his favour. According to journalist Theodore White, television transmogrified Nixon into a “glowering”, “heavy” figure; by contrast, Kennedy appeared glamorous, sophisticated – almost beautiful.

Master of the medium 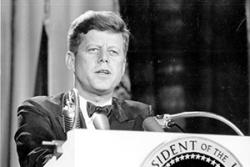 JFK remains among the most charismatic presidents in US history. : Florida Memory, State Library of FloridaCarrying this success into his presidency, Kennedy used television to communicate with the people to great effect through broadcast press conferences and interviews. As demonstrated by the miniseries Kennedy (1983), where Kennedy was played by perennial screen politician Martin Sheen, JFK’s presidency can be reduced to a series of televised moments: his oft-quoted inaugural address (“Ask not what your country can do for you…”); his tours of France and West Germany (“Ich bin ein Berliner”); and his calm, assured broadcasts to the nation during the civil rights demonstrations and the Cuban Missile Crisis.

As American historian Alan Brinkley wrote in 1998: “Even many of those who have become disillusioned with Kennedy over the years are still struck, when they see him on film [or on television], by how smooth, polished and spontaneously eloquent he was, how impressive a presence, how elegant a speaker.”

Most of the Kennedy miniseries is in colour. But in its reconstruction of monochrome images of Kennedy on television, it employs the medium as a means of memorialising him, infatuated with his image in its nostalgic reverie for a more stable and prosperous time.

Kennedy’s image on television (and in newsreel footage) is so seductive it is unsurprising Oliver Stone used it in the opening sequence to his controversial debunking of the official theories behind the president’s assassination in the film JFK (1991). As John Hellmann suggested, this footage establishes Kennedy “as the incarnation of the ideal America in the body of the beautiful man”.

The moving image played a fundamental role in establishing Kennedy as the image-ideal president. As I have argued elsewhere, other presidents have sought to establish their own images in relation to Kennedy’s, from Bill Clinton in 1992 to Barack Obama in 2008 and beyond. Kennedy is a seductive figure – not because of what he did or achieved, but because he cultivated the notion that he reflected the best the United States could be if it dared to dream.

Towards the conclusion of Oliver Stone’s Nixon, the eponymous president, played by Anthony Hopkins, stumbles drunkenly around the White House on the verge of resignation. He looks up to the portrait of Kennedy and says, rather forlornly: “When they [the people] look at you, they see what they want to be. When they look at me, they see what they are.”

Stone is here acknowledging Nixon’s frail humanity as the “ego” to Kennedy’s “ego-ideal”. Where Nixon is deficient and ordinary, Kennedy’s image retains the illusion of perfection in the collective memory. 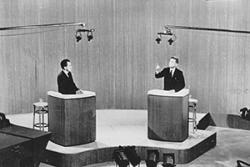 Kennedy and Nixon TV debate.: Associated Press, Creative Commons. Wikimedia CommonsThe 100th anniversary of Kennedy’s birth allows us to reflect upon this legacy. If Kennedy was the superhero and Nixon the flawed human, then Donald Trump is a compendium of some of the worst qualities a politician can have: impulsive, arrogant, narcissistic. In a chaotic, ephemeral and often trivial media environment, Trump, a man with an insatiable appetite for the spotlight and no discernible ideological convictions, has thrived. He believes – and he has not been disabused of this notion – that he can perform the presidency as he performed on reality television in The Apprentice, most recently firing the director of the FBI on television.

We may bemoan the idea that politics has become a television show, but it has. Is that Kennedy’s fault? Yes and no. His polished performances on television hid many questionable tactics and character flaws beneath the surface, but it is often said that we get the politicians we deserve, and in allowing politics to become messily intertwined with the discourses of celebrity and, subsequently, the values of reality television, human beings fostered the conditions that created Kennedy and Trump.

If Kennedy was alive today would he be horrified by what politics has become? No, he’d be on Snapchat.