The North Wales Welsh for Adults Centre, Bangor University, have been developing two interactive apps for Welsh learners.  They have created a fun, comprehensive, easy to use app, to help Welsh learners outside the classroom.

The app includes several interactive templates, which will allow learners to practice their Welsh language skills outside the classroom. These templates include word searches, voice recording, listening tasks, multiple choice questions and various other templates. 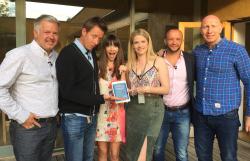 Both apps will be officially launched this week on the television series Cariad@Iaith, a series sponsored by the Welsh Government. Eight celebrities will 'eat, sleep and learn Welsh' in the hope of being crowned the champion of Cariad@Iaith 2015. Nia Parry the series' presenter and an experienced Welsh tutor said:

"This new app is a great learning resource, it’s like having a Welsh tutor in your pocket. You can use it while you're on the bus or train, relaxing in the garden or on the toilet! It is a good way to practice a little and often. "

Lowri Jones from the Welsh for Adults Centre, Bangor University has been working on developing the apps over the past few months.

Mike Harris, owner of Optimwm – one of the companies co-working on developing the apps – is a welsh learner himself. He says that collaborating on this project has been a great boost for him.

"I learned a little Welsh in school, but I never had enough confidence to speak the language, mainly because I always felt that my Welsh wasn't good enough. Using the exercises in the app offered me a great opportunity to gain some confidence. I now feel comfortable speaking Welsh. "

"Technology has a very important role in supporting learners, and there is an increased demand for e-learning provision in Welsh for Adults.  Congratulations Bangor University for developing this app."

The North Wales Welsh for Adults Centre is proud to have invested in another app, but this time for the Intermediate level. The centre hopes to have this level ready for early in the next academic year.

"We're very proud of this investment, and the fact that we’ll be able to provide Welsh learning apps at all three levels. We must invest in digital resources for Welsh learners, and ensure an international platform for our language,  providing resources that are current and fit for today's digital way of life. "