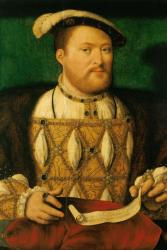 Henry VIII between circa 1530 and 1535- around the time of his 'Great Matter' or divorce proceedingas as we'd call them today.: Joos van Cleve (fl. 1485- 1540/42) formerly attributed to Hans HolbeinNewly-discovered documents show Henry VIII’s legendary marital troubles may have led to other copy-cat splits around the country.

The extraordinary story of a teenager who flip-flopped between two wives in a similar way – and at the same time - as the monarch was trying to change his spouse suggests other couples were watching and being influenced by the impact the King’s case had on the law.

Experts from Bangor University and the University of Exeter have found parallels between events at the Royal court, and the complicated love-life of a member of a landed Welsh Gentry family living near Bangor, Gwynedd. The evidence suggests that society was watching what was happening at court with interest, and that we too could learn more about the society of the time by studying surviving legal records.

Edward Griffith, of the Penrhyn estate in north-west Wales, was married as a teenager to Jane of Cochwillan. Jane died aged 13. With permission from the King’s Chancellor, Cardinal Wolsey, Edward then married Jane’s sister Agnes in around 1527, but the next year she returned to live with her father. At the same time it became public knowledge that Henry VIII had started annulment proceedings to try to free himself from his marriage to his wife Catherine of Aragon – the widow of his brother. The legal experts think this influenced Edward to part from Agnes. The King’s divorce was mentioned in court documents about Edward’s case.

Edward remarried, to Jane Puleston, in around 1529. But he soon began living with Agnes again. He then returned to Jane Puleston and they had three daughters: Jane, Elin and Katherine. The chronology of these events also closely resemble the complicated ending of Henry’s marriage to Catherine.

The experts believe the similarity of the two cases suggest Edward was following events at court as he managed his own marriages.

"I stumbled across this case in investigating the tangled litigation as to whom should inherit the estate. The evidence is contained in witness depositions taken in Chancery proceedings. These depositions are the property of the Trustees of the Powis estate and I am very grateful to the Trustees for their kind permission to publish the results of our findings. Church records for the period are substantially lost. Therefore, these depositions are a lucky survival. This suggests Chancery papers may be a fruitful source for learning more about disputes over marriage in the Tudor period.”

Professor Rebecca Probert, an expert in marriage law from the University of Exeter, said: “We have compared the evidence we have about Edward’s life and it’s very striking that events in his life echo that of events in the royal marriage. This suggests what was happening at court did influence Edward.

“Viewed in isolation, Edward appears at best indecisive and at worst a complete cad. But if you put his actions in the context of the actions of the King, it seems he felt bound by the arguments put forward by his ruler. He may also have just been an impressionable teenager who saw the King believed his marriage was contrary to God’s law, and thought he should feel the same.”

People from north Wales did travel to London for business, and news from court would have been brought home. Edward’s father, Sir William III, was a baronet, so the family would have heard court gossip, and may also have had a legal advisor.

Sir William disapproved of Edward’s marriage to Agnes, who was the daughter of one of his tenants, so may have spotted an opportunity to follow the King’s example of annulling a marriage to a relative so his son could make a better marriage. Witnesses in the later court case said Edward was worried about being disinherited by his father. At his marriage to Jane, Edward gave his troth with his left hand, saying he had already given his right hand to Agnes.

At the same time as Henry’s case was being heard in Rome, Edward got permission from an ecclesiastical court to return to Agnes. He swore an oath that ‘he never had carnal copulation with Jane Williams the sister of the said Agnes’.

However Henry’s case was still not settled, and this may have sent conflicting message to Edward about what he should do, so he parted from Agnes for a second time less than a year later. Catherine was banished from court in 1531. Witnesses said Edward was simply following the example of Henry VIII in putting away Agnes for a second time.

The court documents say: “It was asked whether Edward had reconciled himself to the said Agnes as his lawful wife and with her cohabited until that our late sovereign Lord Henry the eighth did put away his most lawful wife Queen Katharine the Queen Majesty’s mother the said Edward by the example of the said late King encouraged (both the cases being of like quality) did again put away the said Agnes”.

Henry’s marriage was declared void in 1533, and under subsequent legislation Edward’s marriage to Agnes would have been valid, because his first marriage was not consummated. But he did not return to her – perhaps because he had children with Jane, or because Agnes had remarried. But his marriage to Jane Puleston was invalidated by this new legislation, leaving rows about who Edward’s legal heirs were in the future.

Details about Edward’s marriages only exist because his heirs brought a case about the Penrhyn inheritance in 1556, suggesting more evidence about Tudor divorces could be found in Chancery – rather than church - records.

No other cases like this at the time have been found by researchers looking at court records.

Details concerning the litigation in respect of the Penrhyn inheritance are the subject of a newly published volume of the Welsh Legal History Society co-authored by Gwilym Owen and Peter Foden entitled At Variance the Penrhyn Entail.

There is also a possible Welsh dimension concerning Edward’s marriages. Outwardly, Edward’s actions conform to the common law of England and Wales of the time. However, upon closer examination they also appear to mirror the native Welsh laws of marriage.

Another interesting feature of the story is that Agnes was raised in Cochwillan which formed part of the Penrhyn estate. Her mother was Lowry Salesbury. Lowri was not the first member of the Salesbury family to have lived at Cochwillan. Interestingly, another one of Agnes’s predecessors, also called Agnes, had lived at Cochwillan. This predecessor had married Foulk Salesbury by whom she had a son, the eminent Tudor Welsh scholar, William Salesbury. The research concerning Edward’s marriages is published in the journal Law and Humanities.