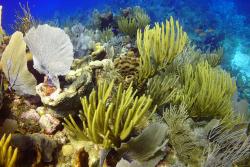 A Cayman islands coral reef : Image credit & copyright: J.TurnerBangor University working in collaboration with The Nature Conservancy have assisted the Department of the Environment to expand the Marine Parks system in the Cayman Islands, a British Overseas Territory in the Caribbean, through projects funded by the DEFRA Darwin Initiative*.

The expansion of Cayman’s existing marine parks was approved by the Cabinet and announced during the visit of His Royal Highness, Prince of Wales, on 28th March.  The Environment Minister indicated that “This expansion will serve to protect our local marine stocks, as well as the crucially important coral reef network surrounding our Islands for generations to come.”

The Prince of Wales highlighted that ‘The Cayman Islands could become a shining example of best practice in integrated and genuinely sustainable management of its land-based and ocean resources. Such an integrated approach is not only essential to protect our eco-systems, but also particularly in the Cayman Islands case to protect the long term viability of economic sectors.”

Department of the Environment (DoE) Director, Gina Ebanks Petrie explained  "These enhanced marine parks areas came about as the result of years-long research by the Department of Environment and Darwin Initiative partners, Bangor University, followed by discussions between successive 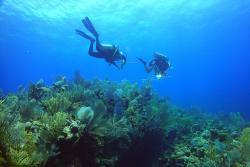 Cayman’s marine parks were originally established in 1986, but an increasing population, tourism, and coastal development, and awareness of wider Caribbean issues such as fishing pressure, nutrient run off from land and climate change has stimulated the need for action and their enhancement.  The expansion increased the area of ‘no-take’ strict areas of protection from a national average of 14% of coastal waters to 48%, and the shelf area managed up to 54.6%.

Croy McCoy, DoE Marine Research Officer, coordinated the field surveys and recently submitted his PhD to Bangor University on the effectiveness of the marine protected areas.  He said “Should these proposals for enhanced marine reserves not have been implemented, we ran the risk of further coral reef degradation and, eventually, ecosystem collapse.’’

The zoned system of marine protected areas reduces conflict and damage by regulating boat anchoring, diving, fishing, fishing at Grouper spawning aggregation sites, taking of marine life, and tourism wildlife interactions. As well as providing boat mooring buoys around each of the islands, a phone app called SIREN (System for Incident Reporting and Enforcement) provides maps of zones, an immediate regulation reference, and access to data.   The next step is for the Cayman Islands Government to draft new regulations, signage, and flyers to inform the public. 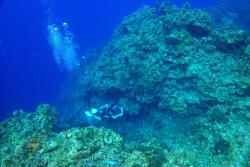 The coral reefs' deep walls protect the Cayman coastline: image credit & copyright: John Turner Professor John Turner of the School of Ocean Sciences, who lead the DEFRA Darwin Initiative research project that provided the scientific evidence for the enhanced marine parks design was delighted to see that the collaborative research effort has had such significant impact at last.  "Field research included Masters students from the MSc programmes in Marine Environmental Protection and Marine Biology on placements with the Department of the Environment who worked with Croy and the Cayman Research Officers to undertake the surveys to build the underlying data about reefs systems and their use. The Darwin Initiative team were engaged in a series of consultations and events to ensure that the need for the enhanced Marine Parks System was supported by local communities under the banner, ‘Save our Tomorrow - Today’."  He went on to say "Cayman has continued to be a world leader in protecting the marine environment, and has in local waters at least, exceeded the call made by the UK at the UN General Assembly 2018 for governments to designate 30% of oceans as Marine Protected Areas by 2030. What’s more, this work has practically met the advanced target of achieving 50% protection by 2050 likely to be proposed at the Convention on Biological Diversity in China 2020."