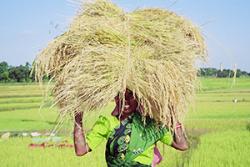 Gathering the rice harvest.A pioneering new method of plant breeding is improving the livelihoods of over 5M households in India and Nepal.

The novel approach, selective plant breeding, was originally developed by Prof John Witcombe at Bangor University to meet the identified needs of resource-poor farmers in the more arid regions of Gujarat, India. He works with indigenous farmers and consumers, introducing properties that are desired by farmers into rice and maize varieties and incorporating on-farm varietal testing and farmers’ experiences. This method has produced new varieties of rice and maize which are highly adapted to the requirements and preferences of local farmers, which in turn improves their adoption and spread among the farming community.

Participatory varietal selection (PVS) of popular rice variety BG1442 in Nepal and the development of 10 new rice varieties using his innovative client oriented breeding (COB) methods in India and Nepal has led to the new varieties being grown on at least 500,000 ha and providing a 15–40% yield advantage over the varieties grown traditionally.

In India, two ‘Ashoka’ rice varieties alone (200F and 228) are estimated to provide benefits of £17M annually to the poorest farming households. These varieties are popular for their high yield, grain quality, superior taste and fodder yield. Their early harvest provides food during lean periods and their pest and drought resistance results in low cost and labour requirements.

In real terms, these direct benefits can allow farmers to plant additional crops or devote time to non-agricultural activities, providing extra income and permitting them to send their children to school.

A new maize variety has had a major impact on food production in Western India between 2008-13. GM-6 has delivered 360,000 tonnes of additional food grain during that period, with a total net present value to these farm households of an average of at least £9M per year. 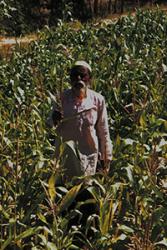 A farmer assesses his GM-6 maize crop.GM-6 was developed to out-perform other varieties under drought conditions and on poor soils and has average grain yields 28% higher than the best available alternative varieties. Since its release in three states in Western India between 2002 and 2005, GM-6 cultivation has rapidly grown to a cumulative area exceeding 2M hectares, of which 54% (more than 1M ha) was during 2008-2013.

This has had a major positive impact on the welfare and prosperity of at least 330,000 households per year and has enabled farmers to sell more grain as well as increasing household self-sufficiency by more than one month.

Because of careful targeting of farmers’ needs, the new variety did not require additional input or resources by the farmers, the result was a variety that matured earlier and gave a higher yield, with the variety being delivered in a shorter time-frame than traditional plant breeding methods.

GM-6 seed has since been officially released for the whole of Gujarat agro-climatic zone and officially recommended for cultivation in Rajasthan and Madhya Pradesh.

The work was DFID-funded research collaboration with Gujarat Agricultural University.

This case study will be part of a Universities Week: Ideas for Life exhibition at the

National Museum Cardiff, highlighting the impact our universities have had over the last 100 years, as well as providing a snapshot of Wales’ most innovative and life-changing research.