Languages: Your Passport to Success 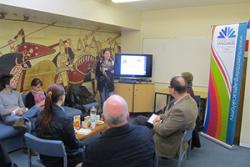 Students from the School Modern Languages recruited as Routes into Languages ambassadors, had an opportunity recently to demonstrate that engaging with the local community can be vital to increase awareness about the importance of learning languages.

In the Languages: your Passport to Success event, local secondary school teachers and pupils got the chance to hear first-hand the fulfilling experience of two Bangor University language students. Susie Turnbull and Andrew Belisle described what they had learned during their year abroad, in various countries such as Spain, France and Italy. Student Emma Noakes gave information about the effect of languages in careers, as well as details on what learning a language at Bangor University entails.

"There was a fluent interaction amongst the guests and the speakers, and our students managed once more to pass on an inspiring message to their audience: languages can take you further".

Feedback from the event was very positive, all those who were present strongly agreed that the event had been an extremely informative. They praised such suitable and inspiring presentations, as well as the motivation and engagement of the Student Language Ambassadors.