Lessons from the Beeching cuts in reviving Britain's railways

This article by Andrew Edwards, Dean of Arts and Humanities and Senior Lecturer in Modern History, at the School of History & Archaeology was originally published on The Conversation. Read the original article.

More than 50 years ago the Beeching Report was published, spelling the end of hundreds of miles of British railway lines and stations. Pretty much immediately, local campaigns sprang up to protest what became infamously known as the “Beeching Axe”. Now, the transport secretary Chris Grayling has announced that some of the lines could be re-opened.

The proposals, aimed to “reverse decades of decline” in the railways, have been praised as the “rebirth of the railways”. Yet huge investment is needed to truly revitalise the railways. Now, as in Beeching’s time, Britain’s railways are in need of updating. And if we want to see a rail system that is both economically viable and socially beneficial there are some lessons to be learned from the wrongs of past policy.

Back in 1963, Dr Richard Beeching’s plans to cut 5,000 miles of line and some 300 stations were outlined in a British Railways Board report, The Reshaping of British Railways. From an economic perspective, the urgent need to identify savings in the railways was hard to challenge. Nationalised in 1948, the railways had struggled to pay their way for most of the following decade and had, by the early 1960s, accumulated significant operating deficits.

The railways were then in drastic need of modernisation to its rolling stock. Many of the stations built in the Victorian era had fallen into disrepair. Hit by substantial rises in the cost of coal and steel, a combination of management inertia and lack of a clear government strategy hampered attempts to place the railways on a sustainable footing. At a time when rail workers were poorly paid, there was even a reluctance to raise rail fares to offset operating losses.

Beeching’s remit in 1961 was to lead to railways back into profitability by the end of the decade. With Britain’s economic fortunes on the wane by the early 1960s, the time was ripe for a thorough rationalisation of Britain’s most prominent nationalised industry.

The clinical and ruthless assessment of what was required to put the railways back on stable footing won many admirers in the then Conservative government. It embraced Beeching’s proposals and was quick to implement his report’s recommendations. Few alternatives were offered. When Labour returned to power in 1964, it did little to reverse the cuts – although Beeching was removed as chairman of British Railways in 1965. The reality was that – for both the main parties at the time – the vision of modernisation was framed around a transport system dominated by roads.

As prime minister at the time, Harold Macmillan confided in his diary in 1963: “In ten years we have gone from 2m to 6m motor cars. In another ten years we may go to 12 and eventually 18m cars.” The opening of the new M1 motorway in 1959 – eventually connecting the city of Leeds in the north of England to London in the south – had already provided an iconic symbol of a new vision that was to be pursued vigorously in the decades that followed.

The main opposition to Beeching’s proposals focused on the social impact of the proposed cuts. Opponents argued that Beeching had paid scant attention to the social importance of the railways. Many argued that the closure of many lines in rural Britain would isolate communities.

In regions of Britain such as rural north Wales – where tourism was widely viewed as an alternative to the fast-declining extractive industries and where depopulation was a significant social, cultural and economic problem – opposition to Beeching was voiced across the political spectrum. As a local Labour MP argued at the time, the railways were “a form of social service, which is as essential as the supply of electricity, gas, water and the NHS”.

Beeching did recognise these concerns, but it was outside his remit to find a solution to the social issue. Although local campaigns slowed down the rate of closures, the vast majority of the report’s recommendations were enacted. Across Wales, of the 1,500 miles of line in operation in 1951, only 670 miles remained in 1965. By 1975, the figure had fallen to less than 500. 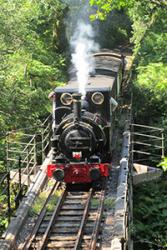 Wales' steam trains have become popular tourist attractions.Since the closures, more than 50 lines have already reopened. In parts of the UK, many former lines were resurrected as part of the new “Heritage Rail” sector, while many successful community rail partnerships have also flourished. Elsewhere, disused lines have become popular cycle and walking tracks.

The former line from Bangor to Caernarfon along the North Wales coastline encapsulates the Beeching legacy. A significant proportion of the former line is now a popular cycle track, the site of the former station in Caernarfon now hosts a supermarket, while the line south of Caernarfon has been developed as part of hugely successful Welsh Highland Railway. To reopen that line would, no doubt, stimulate a vigorous debate among local cyclists, environmental campaigners, the local industry and heritage conservationists.

Contrary to the apocalyptic narrative that accompanies any discussion of his infamous “axe”, there was life for the railways after Beeching. But the reality was that the majority of Britons did view the roads as a more convenient, economical and practical mode of travel from the 1950s onwards.

Today, with those now roads overcrowded and motoring costs escalating, the railways are once again providing a viable alternative. Rail passenger numbers have risen dramatically over the past two decades. For that reason alone, there is logic in revisiting Beeching.

Regular rail users may well have a different view. Overcrowded trains, idiosyncratic timetabling and frequent delays are just some of the problems that need to be addressed. Moreover, rail fares have risen rapidly in real terms since the recession more than a decade ago. The rise of 3.4% in prices in 2018 will compound that problem. And the problems that faced Beeching back in the early 1960s are still there.

Whether nationalised or in private hands, Britain’s railways are still in desperate need of investment, modernisation and coordination. Meanwhile, Beeching’s elusive search for a more efficient railway goes on.