Lessons in bilingualism: what can Corsica learn from Wales?

A Corsican student is currently visiting the School of Social Sciences on an internship to learn about bilingualism in Wales. Petru Filippi, who is enrolled in a Masters degree program in the University of Corsica, will be spending four months in Bangor under the supervision of Dr Cynog Prys, Lecturer in Sociology and an expert in language planning in Wales.

Petru explains: “I chose to do a research internship about the impact of the bilingual language policies in Wales because we have a similar bilingualism situation in Corsica, but the Corsican language doesn't have official recognition, and we're fighting for it”. 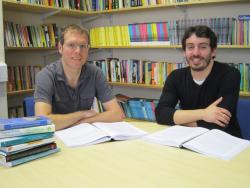 “The Welsh situation is interesting for me, because it’s an old language, totally different to English, which has survived until now. It’s also the most spoken surviving Celtic language”, adds Petru.

“Moreover, the other language of the Welsh people is English, which is a major international language. So, if Welsh people can maintain and increase the use of Welsh despite this, that would be a good lesson for the Corsican situation.”

During his time in Wales, Petru will be visiting various organisations involved in promoting the use of Welsh, both in the Bangor area and further afield, and will be writing a report on the situation of Welsh in Wales, and what lessons can be learnt for the Corsican language revival.

Dr Cynog Prys said: “It’s wonderful to be able to welcome Petru here to Bangor University. The Corsican and Welsh languages face many similar challenges and obstacles for future preservation and an exchange in knowledge and experience is valuable for both language communities. It has been interesting for me to hear from Petru about how Corsican is used in day to day life in Corsica, even though they receive little support from the French government.

“Petru will have the opportunity to contribute to teaching within the School of Social Sciences by giving a guest lecture during the ‘Hawliau Ieithyddol’ (Language Rights) module. This is an excellent opportunity for my students to learn about Corsican and compare how various states approach multilingualism and minority language groups”.