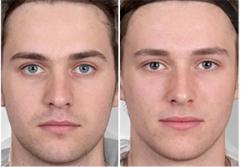 An example of the images created from high (left) and low (right) scoring ASD symptom scorers.Recent research from Bangor University has revealed a new spin to a long-standing theory of autistic spectrum disorder (ASD).

The ‘extreme male brain’ theory proposed by Simon Baron-Cohen, speculates that ASD is a consequence of elevated pre-natal testosterone levels. In a study recently published in the journal, Clinical Psychological Science, Naomi Scott and colleagues at Bangor University’s School of Psychology investigated the possible implications this has for a physical appearance associated with ASD.

They created two sets of composite images made up of the facial appearance of individuals scoring high and low for symptoms of ASD. When these images were rated they found males with more symptoms of ASD to be rated as more masculine in appearance.

This finding not only lends support to Baron-Cohen’s theory but also connects physical traits and behaviour through hormonal effects. The implications of this are two-fold; firstly from a clinical perspective they demonstrate the existence of facial traits associated with ASD that are identifiable by untrained observers - that males with ASD are hyper-masculine in facial appearance. Second are social consequences of these perceptions. Highly masculine males are perceived to be dominant and aggressive, characteristics not in tune with the classic perception of individuals with ASD.

Naomi Scott, who completed this research as part of a PhD funded by the Economic and Social Research Council said:

“One of the consequences of ASD is impaired social skills and these findings suggest an additional barrier for individuals with the disorder to overcome. We make assessments about an individual’s personality from first glance using cues from facial features, which we then use to gauge how to interact with that individual. If these cues don’t match the person’s behaviour, the interaction may be jilted from the offset, amplifying existing social skills problems for individuals with ASD”