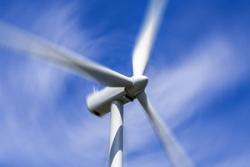 The wind-farms lying offshore at Llandudno are to provide the inspiration and the sounds for a music composition for Llandudno’s LLAWN Festival, by Bangor University music lecturer, composer and sonic artist Ed Wright, performing as the ‘Sonic Wave laboratory’ with Charles Gersholm.

The two locally based sound artists will produce a sonic art-work created by nature and shaped by manmade machines. Large outdoor rotating machines with sensors will be placed in the Llandudno promenade shelters. These will interact with passes by who will hear sound coming direct from the wind farm to create an ever changing sound composition. The temporary mini turbines form a small quintet that can be listened to either individually or inside the composers’ ‘laboratory’, a converted Bathing Machine.

The performance will be available between 12.00- 6.00 pm over the Festival week-end (19- 21 September), one of the free accessible events which provide varied interpretations of Llandudno’s past, present and future.

Composer Ed Wright is interested in the combination of digital technology and more conventional forms of music making and in Multi-media art and music. He gained his PhD in Music from Bangor University, where he lectures.  He enjoys the electroacoustic end of the musical spectrum, capturing and developing real world sounds into musical structures often with the help of computing and immersive playback systems. 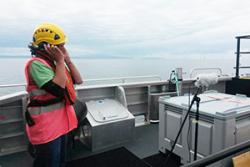 Ed Wright making a field recording on a wind turbine.He said: “It is great to have a chance to work with a subject that is so interesting and potentially divisive. Many people who live in the area see the windmills out on the horizon most (clear!) days, and it’s refreshing to explore what that can mean within a culture in an emotive sense, as well as the scientific and ecological impact. In addition to this it is a wonderful creative challenge, collaborating with Charles to use his windmill sculptures in order to generate music as people and nature interact with them. These will relay information back to the bathing machine; for instance how fast the turbine is spinning, or how overcast the sky is. The sounds and samples which are sourced from the local area (including out at the windfarm) are transformed and articulated based on what the weather does on the day and how people explore the windmills themselves. Hopefully this will create a very fun, beautiful and thought provoking work.”

Born in Llandudno and recently returned Charles Gershom has a lifelong obsession with technology.

Charles graduated in June 2013 with a First Class BA in Fine Art. Charles has had work commissioned for the BBC, regularly exhibits and supports multiple projects by providing technical knowledge in the capacity of an Artist & Technologist. Much of his work features custom built machines created from de-constructed consumer electronics. Charles uses this to produce electronic installations, audio performances and computer generated video with a very bare mechanic aesthetic.