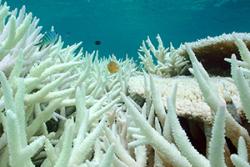 But they’re under increasing threat of ‘bleaching’ – when the symbiotic algae that live within the coral are expelled due to warmer sea temperatures, starving the coral of photosynthetic energy and weakening the viability of the whole coral reef structure in the process.

New information showing at a very localised level, which coral reefs will be the first to suffer as a result of a predicted rise in global sea temperature averages, and which might be offered a reprieve, is now available and published in the journal Scientific Reports. This data layer covers all the world’s coral reefs at a 4-km resolution (i.e. information is extractable for each 4-km pixel) and can be used to decide where to focus energies in conserving these vital and threatened environments.

“Predicting when and where annual bleaching occurs will help policymakers and conservationists decide which reefs to prioritize,” said study leader Dr. van Hooidonk of NOAA and the University of Miami. “Reefs that will suffer annual bleaching later - known as climate “refugia” - are top priorities because they have more 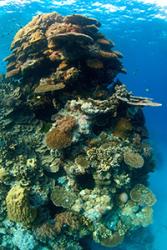 “These predictions are a treasure trove for those who are fighting to protect one of the world’s most magnificent and important ecosystems from the ravages of climate change,” said Erik Solheim, head of UN Environment. “They allow conservationists and governments to prioritize the protection of reefs that may still have time to acclimatize to our warming seas. The projections show us where we still have time to act before it’s too late.”

You may ask how we are to preserve coral reefs in the face of factors beyond our control. Local actions such as limiting fishing, limiting run-off of pollutants such as fertilizers from the land, and the reduction of disturbance or damage through tourism can contribute to the overall health and resilience of a reef. However, “our strategy of attempting to climate-proof coral reefs by managing local stressors alone is dangerous” explains Dr. Gareth Williams of Bangor University's School of Ocean Sciences; “we need to urgently tackle global emissions at an international scale if we are to preserve coral reefs for future generations.”

If emission reductions exceed pledges made by countries to date under the Paris Agreement, coral reefs would have another 11 years, on average, to adapt to warming seas before they are hit by annual bleaching. If such emissions reductions become reality, many high and low latitude reefs in Australia, the south Pacific, India, Coral Triangle and the Florida Reef Tract will have at least 25 more years before annual bleaching occurs, buying time for conservation efforts. However, reefs near the equator will experience annual bleaching much sooner, even if emissions reductions pledges become reality.

“It is imperative that we take these predictions seriously and that, at the very minimum, we meet the targets of the Paris Agreement. Doing so will buy time for coral reefs and allow us to plan for the future and adapt to the present,” said Mr. Solheim. 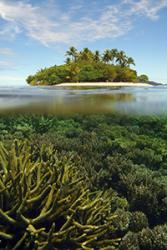 Coral reefs are sensitive to climate change : Image credit Jeffrey MaynardThe research group comprising and led by the University of Miami and UN Environment, is now developing a programme to share this vital information with those conservationists and other agencies (e.g. the International Panel on Climate Change, IPCC) charged with managing the world’s important reef areas- so that this information can be incorporated into their coral reef action plans.