Netflix will begin streaming its latest epic fantasy drama, Cursed, based on the Arthurian legend and centering on the iconic Lady of the Lake on Friday July 17th.

Firmly embedded in one strand of the Arthurian romances, the 10-part series reimagines and explores both timeless and timely themes of destruction of the natural world, religious zeal and oppression, senseless war and finding the courage to lead in the face of the impossible.

Central to the coming-of-age version of the story is Nimue, described by the programme makers as ‘a powerful warrior witch who has a mysterious gift and is the young woman who would become the Lady of the Lake’. 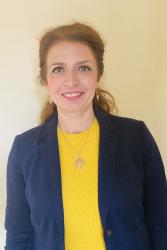 Prof Radulescu said, “The Lady of the Lake is best known from Old French Arthurian chivalric romances, but one of reasons why I think this character continues to fascinate is that there are, in fact, several ladies of this title.

"One of them is credited by the storytellers to have raised the paragon of chivalry Lancelot. Another, known as Vivien/Vivienne or Nimüe, is the character best known for her role in Merlin’s demise – taking his powers away through seduction and replacing him in the world of magic.

“In Thomas Malory’s 15th century version of the Arthurian legend, he’s explicit about the fact that there are several ‘ladies’ of the of the Lake.

"The ‘chief’ Lady of the Lake as he calls her, different from Vivien, is often called upon to authenticate events and provide information about the past and the future, as is often the case when crime motives and perpetrators cannot be identified beyond doubt.

"However, we cannot ignore that the Lady of the Lake can sometimes suffer at the hands of a knight, as is the case in Malory’s story of Balin, the knight who ruthlessly decapitates her when she claims his head for a crime he had committed earlier.”

Nimue is portrayed in the Netflix series by Katherine Langford, known for her role in the provider’s series '13 Reasons Why', while Arthur is portrayed by American-Australian actor Devon Terrell.

The Lady of the Lake plays an important role in Arthurian legend to intervene or speak truth about the past, and also to exonerate other women, as she does when Guenevere is accused of poisoning a knight during her feast. 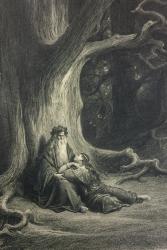 An illustration of Merlin and Viviane by Gustave Doré from ‘Vivien’ by Alfred Tennyson, 1867he mystery and magic that surrounds these characters also give them enduring appeal, according to Prof Radulescu:

“Medieval writers turned to God for the final say in issues of controversy over truth," she said. "The fact that magic is woven into the Arthurian story through characters such as Merlin and the Lady of the Lake doesn’t conflict with that, but rather speaks of ways in which magic can sustain a society or societies where direct answers cannot be obtained.

"Myths and legends continue to have mass appeal and make compelling drama for this very reason – they are a way of considering the world around us without demanding absolute answers.”