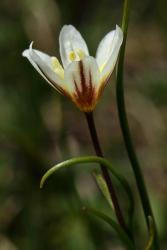 The Seventeenth Century naturalist and scholar Edward Lhuyd may be best known for his discovery ‘Snowdon Lily’  or as the ‘father’ of Celtic studies’, but in his keynote lecture Huw Pryce, Professor of Welsh History at Bangor University, argues that Lhuyd’s foundational understanding of Welsh history was quite characteristic of his age.  By cooperating with antiquarians in Wales, Professor Pryce argues that Lhuyd also sheds unique light on the historical culture of his peers – including the ‘legends’ and ‘traditions’ of the people.

Also among a packed and varied Conference agenda is an intriguing panel on Landscaping the Welsh past, discussing how the landscape can be used as a historical source.

Bangor University postgraduate student Leona Holland will be reviewing the site of a disused Whisky distillery in Bala, Fron Goch, which was later used as a World War One prisoner of war camp and then camp for Irish internees amassed after the 1916 Easter Rising.

Under the same topic, archaeologists Gary Robinson and historian, Mari Wiliam and undergraduate student Owen Hurcum of Bangor University discuss how traces of the past which remain in the landscape, such as graffiti have been overlooked. 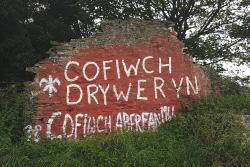 Cofiwch Dryweryn - Remember Tryweryn graffiti on a wall on the A487 near Llanrhystud, Aberystwyth. Originally painted in the 1960s it has been repainted and altered several times since. : Wiki Images image by Dafydd Tomos CC BY-SA 4.0Mari Wiliam explains:

“There is a vivid cultural memory in society about controversies in twentieth-century Wales, such as the 'drowning' of the Tryweryn valley in 1965 or the Investiture of Charles as Prince of Wales in 1969.  These incidents heralded Welsh nationalist protests, most strikingly by more 'militant' groups such as the Free Wales Army, who created a public spectacle by cloaking themselves in uniforms and prominently displaying their 'White Eagle of Snowdon' insignia.  Our discussion combines archaeological and historical approaches and complements co-panellist Sean Martin's exploration of the contested landscapes of Tryweryn and Trawsfynydd Nuclear Power Station. We will be looking at how graffiti, commemorative parades and even t-shirts sustain a visual and material trace of Welsh nationalist 'milestones', whilst also perpetuating emotive myths about the modern Welsh past.'

‘The NAASWCH conference was last in Bangor in 2012, and I’m pleased to welcome it once more to the University, as it is a wonderful opportunity to learn about cutting-edge multi-disciplinary research into both the Welsh past and contemporary society’