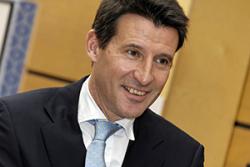 Lord Coe who will be in Bangor on November 25th.One of Britain’s greatest-ever middle distance runners, and the man who made the London 2012 Olympic Games a reality, will visit Bangor University in November for a special event to discuss his life and career. Seb Coe – now Lord Coe – won 4 Olympic medals in a glittering athletic career, including Gold Medals for the 1500 metres in the 1980 and 1984 Olympic Games in Moscow and Los Angeles respectively. In a single year, 1981, he set world records for the 800 metres, 1000 metres and the mile.

After retiring from the sport, Seb Coe briefly turned to politics: he was a Member of Parliament from 1992 until 1997, and became a Life Peer in 2000. He headed the triumphant London 2012 bid for the Olympic Games, and then chaired the London Organising Committee of the Olympic Games. He has been widely acclaimed for his work in that role, and he was presented with a Lifetime Achievement Award at the BBC Sports Personality of the Year in 2012. He was also made a Companion of Honour.

“An evening with Seb Coe” will take place in Prichard-Jones Hall in the Main University Building at 7.00pm on Monday 25 November. Lord Coe will be in conversation with the Chair of the University Council and fellow peer, Lord Davies of Abersoch. Admission to the event will be by ticket only – there is no charge, but to obtain a ticket please contact Lynne Hughes (sebcoe2511@bangor.ac.uk). Entry to the hall will be on a first-come, first-served basis – with doors opening at 6.20pm.