The ATM at 50: how a hole in the wall changed the world

This article by Bernardo Batiz-Lazo, Professor of Business History and Bank Management, Bangor University was originally published on The Conversation. Read the original article.

Next time you withdraw money from a hole in the wall, consider singing a rendition of happy birthday. For on June 27, the Automated Teller Machine (or ATM) celebrates its half century. Fifty years ago, the first cash machine was put to work at the Enfield branch of Barclays Bank in London. Two days later, a Swedish device known as the Bankomat was in operation in Uppsala. And a couple of weeks after that, another one built by Chubb and Smith Industries was inaugurated in London by Westminster Bank (today part of RBS Group). 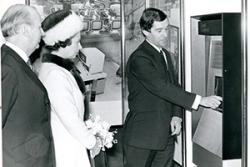 Queen Elizabeth II gets a tutorial. : Lloyds Banking Group Archives , Author providedThese events fired the starting gun for today’s self-service banking culture – long before the widespread acceptance of debit and credit cards. The success of the cash machine enabled people to make impromptu purchases, spend more money on weekend and evening leisure, and demand banking services when and where they wanted them. The infrastructure, systems and knowledge they spawned also enabled bankers to offer their customers point of sale terminals, and telephone and internet banking.

There was substantial media attention when these “robot cashiers” were launched. Banks promised their customers that the cash machine would liberate them from the shackles of business hours and banking at a single branch. But customers had to learn how to use – and remember – a PIN, perform a self-service transaction and trust a machine with their money.

People take these things for granted today, but when cash machines first appeared many had never before been in contact with advanced electronics.

And the system was far from perfect. Despite widespread demand, only bank customers considered to have “better credit” were offered the service. The early machines were also clunky, heavy (and dangerous) to move, insecure, unreliable, and seldom conveniently located.

Indeed, unlike today’s machines, the first ATMs could do only one thing: dispense a fixed amount of cash when activated by a paper token or bespoke plastic card issued to customers at retail branches during business hours. Once used, tokens would be stored by the machine so that branch staff could retrieve them and debit the appropriate accounts. The plastic cards, meanwhile, would have to be sent back to the customer by post. Needless to say, it took banks and technology companies years to agree common standards and finally deliver on their promise of 24/7 access to cash.

Estimates by RBR London concur with my research, suggesting that by 1970, there were still fewer than 1,500 of the machines around the world, concentrated in Europe, North America and Japan. But there were 40,000 by 1980 and a million by 2000. 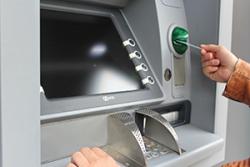 Ready cash? You can bank on it.A number of factors made this ATM explosion possible. First, sharing locations created more transaction volume at individual ATMs. This gave incentives for small and medium-sized financial institutions to invest in this technology. At one point, for instance, there were some 200 shared ATM networks in the US and 80 shared networks in Japan.

They also became more popular once banks digitised their records, allowing the machines to perform a host of other tasks, such as bank transfers, balance requests and bill payments. Over the last five decades, a huge number of people have made the shift away from the cash economy and into the banking system. Consequently, ATMs became a key way of avoiding congestion at branches.

ATM design began to accommodate people with visual and mobility problems, too. And in recent decades, many countries have allowed non-bank companies, known as Independent ATM Deployers (IAD) to operate machines. The IAD were key to populating non-bank locations such as corner shops, petrol stations and casinos.

Bank to the future

The ATM has remained a relevant and convenient self-service channel for the last half century – and its history is one of invention and re-invention, evolution rather than revolution.

Self-service banking and ATMs continue to evolve. Instead of PIN authentication, some ATMS now use “tap and go” contactless payment technology using bank cards and mobile phones. Meanwhile, ATMs in Poland and Japan have used biometric recognition, which can identify a customer’s iris, fingerprint or voice, for some time, while banks in other countries are considering them.

So it’s a good time to consider what the history of cash dispensers can teach us. The ATM was not the result of a eureka moment of a single middle-aged man in a bath or garage, but from active collaboration between various groups of bankers and engineers to solve the significant challenges of a changing world. It took two decades for the ATM to mature and gain widespread, worldwide acceptance, but today there are 3.5m ATMs with another 500,000 expected by 2020.

Research I am currently undertaking suggests that ATMs may have reached saturation point in some Western countries. However, research by the ATM Industry Association suggests there is strong demand for them in China, India and the Middle East. In fact, while in the West people tend to use them for three self-service functions (cash withdrawal, balance enquiries, and purchasing mobile phone airtime), Chinese customers consumers regularly use them for as many as 100 different tasks.

Interestingly, people in most urban areas around the world tend to interact with the same five ATMs. But they shouldn’t be taken for granted. In many countries in Africa, Asia and South America, they offer services to millions of people otherwise excluded from the banking sector.

In most developed counties, meanwhile, the retail branch and the ATM are the only two channels over which financial institutions have 100% control. This is important when you need to verify the authenticity of your customer. Banks do not control the make and model of their customers’ smart phones, tablets or personal computers, which are vulnerable to hacking and fraud. While ATMs are targeted by thieves, mass cybernetic attacks on them have yet to materialise.

I am often asked whether the advent of a cashless, digital economy heralds the end of the ATM. My response is that while the world might do away with cash and call ATMs something else, the revolution of automated self-service banking that began 50 years ago is here to stay.