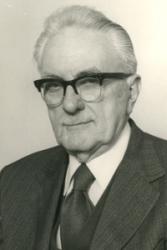 Sir Thomas ParryIn order to commemorate the 50th anniversary of the publication of the Oxford Book of Welsh Verse, edited by Sir Thomas Parry, Professor Derec Llwyd Morgan will deliver a public lecture in Welsh, on Thomas Parry and Bangor University on Wednesday 17 October as 5.30 in the University’s Main Arts Lecture Theatre.

This is the second in a new series of Archive and Special Collections Public Lectures. It is free and open to the public, and will be delivered in Welsh. Professor Derec Llwyd Morgan is currently working on a book about Professor Thomas Parry and is using documents and letters relating to and by Thomas Parry in the University’s Archive.

Professor Derec Llwyd Morgan shares some of his career history with Professor Thomas Parry, as both were appointed to lectureships at the School of Welsh, Bangor University and later became Principals of the University of Wales, Aberystwyth (as it was at the time).

Professor Thomas Parry also became Professor of Welsh at Bangor University and was appointed Librarian at the National Library of Wales, before being appointed at Aberystwyth University. He made a significant contribution to the study of Welsh literature. As wellas the Oxford Book od welsh verse, his major contributions among other publications, include editing the works of Dafydd ap Gwilym and the first scholarly work on the history of Welsh Literature, Hanes Llenyddiaeth Gymraeg hyd 1900, which was translated into English and published as A history of Welsh Literature in 1955.

According to Prof Derec Llwyd Morgan, writing about Sir Thomas Parry in the online Welsh Biography:

“He was a prince of a scholar who never neglected the ordinary people, their best contributors or their indispensible establishments.”

The Lecture should give a foretaste of what is to come in Professor Llwyd Morgan’s new book.