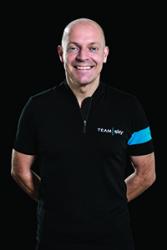 Following a £2.5m upgrade, Bangor University’s sports centre will be renamed Canolfan Brailsford in honour of cycling coach Sir Dave Brailsford, who was brought up in nearby Deiniolen.

Previously known as Maes Glas, the centre has recently seen the addition of a new Sports Dome which was opened late last year by Seb Coe, and two indoor tennis and netball courts.

Sir Dave Brailsford said: “I am honoured that Bangor University has chosen to name its Sports Centre after me, and I am delighted to see that sport plays such a central part in the University’s activities.”

Richard Bennett, Bangor University’s Director of Sport said: “Following this substantial redevelopment we decided to rename the centre, and who better to name it after than Sir Dave Brailsford, who in addition to being responsible for the immensely successful transformation of British Cycling, was brought up locally and is also an Honorary Fellow of this University.

“It will also have a brand new aerobics studio as well as a specialist performance gym which will include six Olympic lifting platforms.

“The floor of the main sports hall will be replaced and there will be a complete transformation of the public changing rooms. A new classroom for coaching courses and meetings will also be added.”

Work on the development is scheduled to be completed by the summer.

Under Sir Dave’s guidance cyclists in the UK have become the most successful in the world, winning 30 Olympic medals in Athens, Beijing and London, 49 Paralympic medals and over 100 World Championship medals.

In 2010 he was appointed manager of the UK-based ‘Team Sky’ cycling team and oversaw the victories of both Sir Bradley Wiggins and Chris Froome in the Tour de France of 2012 and 2013.