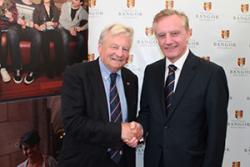 Bangor University’s Vice Chancellor, Professor John G Hughes has achieved another milestone on the road to proficiency in Welsh. He has achieved an A grade in his Advanced Use of Welsh exam (which is the same standard as an A level) and done so in only four years of learning the language.

Originally from Northern Ireland, Professor John G Hughes was appointed Vice-Chancellor of Bangor University in 2010 and immediately made a commitment to learn Welsh.

“During his interview for the post of Vice-Chancellor, Professor John Hughes made a commitment to learning Welsh to a high standard of fluency. His achievement gives me great pleasure, and sets an example for other appointments to public positions in Wales.

This A level is the latest step recognising the achievements of Welsh learners such as the Vice Chancellor.

“The Welsh language is an important part of the ethos at Bangor University.  I have greatly enjoyed learning the language and I hope that my experience will be an encouragement to other learners.”

Professor John Hughes has been taught by tutors at the University’s Welsh for Adults Centre.

Elwyn Hughes, Senior Tutor-Organiser and Deputy Director of the Centre commented on the Vice Chancellor’s commitment to learning the language, saying:

“The Vice- Chancellor has been most conscientious in his commitment to learning Welsh and has achieved a very high standard in a short space of time.  He is now able to discuss a wide range of subjects in Welsh, he has an expansive vocabulary and he has read a number of challenging books. At the moment, he’s reading Chwalfa by T. Rowland Hughes in preparation for attending the opening production of Pontio, the University’s Arts & Innovation Centre. The important thing now is that he has plenty of opportunity to practice his skills, so Welsh speakers  should remember to communicate with the Vice-Chancellor in Welsh on every available occasion from now on.”