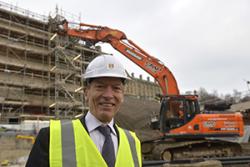 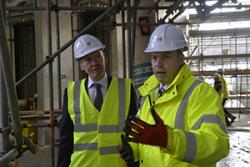 Director of Estates, Dylan Roberts explains developments on the site to the Minister “I was pleased to be visiting the Pontio site – a project which will be a huge boost for the arts in the region as well as for Welsh culture. I look forward to returning to Bangor to see the completed building and to see some of the fantastic events that are being planned. This project is a massive investment in Bangor and everyone can be really proud of having such a facility in the city.”

“With less than a year to go until we open, activity on site and in the community is gearing up ready for our exciting opening season of artistic events. Pontio will be a focal point for the local community and University alike – a place to meet, eat, learn, be entertained and discover.” 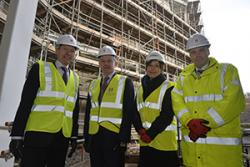 John Griffiths AM on site with Professor John G Hughes, Vice-Chancellor, Elen ap Robert, Pontio’s Artistic Director and Dylan Roberts, Director of Estates at Bangor University“The performing arts and cinema spaces will be home to a wide range of art forms – from mid scale drama and dance to comedy and film, from aerial spectacle to gigs, large and small and from chamber opera to experimental and world music. It will be a hub for home grown talent and will offer the very best high quality cultural experiences from Wales, the UK and across the world.”