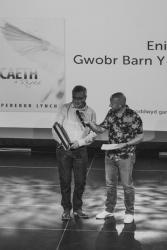 Caeth a Rhydd by Peredur Lynch, Professor in Welsh had been shortlisted in the Welsh language Poetry category. Professor Peredur Lynch completed his first poetry volume while on a sabbatical at Harvard University’s Department of Celtic Languages and Literatures.

“I’m pleased to have won this Award. This is a vote of confidence by the most important people in the literary world - the readers and book-buyers.”

Speaking at the Awards Ceremony, Chief Executive of Literature Wales, Lleucu Siencyn said whilst thanking all the partners for their support of this prize:

“Wales Book of the Year is one of the highlights of our cultural calendar. It’s vital that we have a national book award which gives a platform to all our literary genres – and treats our two languages equally. Wales consistently produces excellent writers, and this Award is testament to this each year. Congratulations to all of this year’s winners!”

Administered by Literature Wales, the Wales Book of the Year Awards are presented annually to the best Welsh and English-language works in the fields of creative writing and literary criticism in three categories: Poetry, Fiction and Creative Non-Fiction.