A member of staff from Bangor Law School is preparing to take part in one of the toughest athletic challenges in the world – the Ironman triathlon.

Xavier Laurent, Research and Delivery Support Officer for the Institute of Competition and Procurement Studies at the Law School, will take on the Ironman 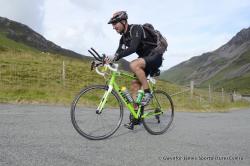 Xavier in training mode ahead of the Ironman Wales challenge, which takes place in Tenby in SeptemberWales challenge on Sunday, 8th September 2013. The competition consists of a 2.4 mile swim, a 112 mile bicycle ride and a marathon 26.2 mile run, all of which must be completed within 17 hours and without a break.

Since moving to north Wales in 2002, Xavier, who will this year complete a PhD in New Media and Psychology, has taken up a number of outdoor activities. He was already a keen sportsman in his native France, but the scenery and landscape of North Wales inspired him to take on new challenges such as the Snowdon Race, the Snowdonia Marathon and various fell running races. “In 2010 I decided to take things a step further and to participate in a few local triathlons”, says Xavier. “I really enjoyed the extra challenges of swimming and cycling, and decided to work harder at these two disciplines”.

Xavier is now deep into preparation for the Ironman contest, which will take place in Tenby, South Wales. “I would like to achieve a good performance in this race – I hope to achieve a time of 13-14 hours”, he says. “I’ve already done a few local races this year, such as the Snowdonia Slateman Traithlon and the Etape Eryri. I’ve even taken a dip in the Menai Straits, which resulted in a jellyfish sting!”.

Xavier is not the only athlete in the Law School. Final year undergraduate Benjamin Pritchard competed in the ETU Triathlon European Championships in Turkey in June 2013, while lecturer Sarah Nason was the first person from Wales to ever compete in the Ultraman Canada Championships, which is regarded as the world’s toughest triathlon.