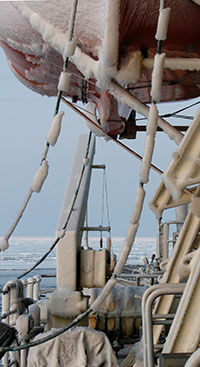 The remote polar regions inspire explorers and scientists alike who are drawn to test their mettle amongst the dramatic icy land- and sea-scapes that host specialized ecosystems thriving under the most extreme weather conditions on our planet. Now, these environments are of greater interest that ever, as it is here that climate change is occurring more rapidly than other parts of the globe. From the ever decreasing Arctic summer sea-ice minima to massive icebergs calving from Antarctic ice-shelves, the role of the polar oceans cannot be ignored. 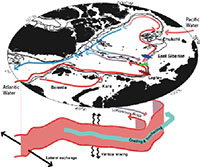 Inflowing warm Atlantic water entering the Arctic Ocean through Fram Strait provides the largest oceanic heat source to the region. Since 2007, Bangor University has been engaged in measuring the turbulence which has the potential to stir-up this heat to the surface and thus melt sea ice. Our results have challenged the exiting paradigm that increased momentum transfer by the wind, as a consequence of retreating seasonal sea ice extent, will cause more mixing, by showing that even under the anomalously stormy and ice free conditions of 2012, enhanced mixing is restricted to the surface layers of the ocean with no evidence of enhanced mixing at the depth of the Atlantic water (Lincoln et al., 2016).

We have demonstrated the key role of the tide in driving large vertical heat fluxes over "hot spots" on the continental slopes surrounding the Arctic Ocean, despite the location of the much of this ocean poleward of the critical latitude at which a linear internal tide can form (Rippeth et al., 2015). Furthermore we have identified the mechanism responsible for the energy transfer from tide to turbulence (Rippeth et al., 2017) and so are able to show that these mixing "hot spots" will expand geographically as the Arctic Ocean spins up in response to declining seasonal sea ice extent.

This research is now being extended to look at how changing mixing rates in the Arctic impact on the ecosystem, through the NERC Changing Arctic Programme. http://www.nerc.ac.uk/research/funded/programmes/arcticocean/.

The swift Antarctic Circumpolar Current (ACC) flows eastwards through the Southern Ocean surrounding Antarctica, linking all three major ocean basins. The Southern Ocean is characterized by a double meridional overturning cell in which water properties are carried south by mesoscale eddies returned by a northwards Ekman transport driven by westerly winds at the surface and dense Antarctic bottom water spilling over the continental slope and spreading north at depth. Our focus has thus far been on both mixed layer processes that impact heat, salt and nutrient fluxes in the upper ocean (Brannigan et al. 2013) and the Ekman layer (Polton et al., 2013), as well as quantifying lateral eddy fluxes of heat and momentum across the mean streamlines of the ACC (Lenn et al, 2011) and identifying internal tides as a major source of mixing along the Antarctic continental slope (Silvester et al., 2014).

This work has focused on how the ocean, especially tides, interacts with the large ice sheets in Antarctica and Greenland (Rosier et al., 2014a; Wilmes and Green, 2014). The work here has identified a potential positive feedback between reduced ice shelf extent and the tides (Rosier et al., 2014b). It has also explored the potential impact of even moderate ice-sheet calving events on global climate (Green and Schmittner, 2015). In a recent collaboration with scientists from Harvard, McGill and Oregon State Universities we have demonstrated the global impacts of the disappearance of major ice sheets on tides and tidally driven processes (Wilmes et al, 2017). These include changes in the strength of the global overturning circulation and in the efficiency of the continental shelf CO2 pump.