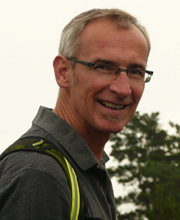 Hans-Peter Kubis studied Biological Sciences with focus in Physiology at University Goettingen, Germany. He then went to Medical School Hanover, Germany and earned his doctoral degree in Biochemistry at University Hanover, followed by his habilitation in Physiology at Medical School Hanover. He worked many years investigating the regulation and development of skeletal muscle fibre types using artificial muscles in culture and animal systems. After coming to Bangor, he now works on causes and mechanisms of obesity on physiological and psychological levels, as well as on the prevention and treatment. This includes the development of weight loss strategies, techniques for investigating perceptual responses to food, analysing the interaction of nutrients and metabolism on whole body and cellular levels. Moreover, he investigates the pathophysiology of chronic diseases connected with obesity like obstructive sleep apnoea and diabetes type II. A further main interest is the investigation of mechanisms of adaptations to exercise on psychological, physiological and cellular levels. In particular, interactions of exercise stimuli and nutrients influencing skeletal muscle and whole body metabolism and weight regulation are investigated with various techniques. A broad spectrum of physiological, cellular-biochemical, as well as psychological techniques are used for the investigations. He is director of the Physical Activity and Wellbeing group (PAWB group).

I am module leader for Human Physiology and Biochemisty of Exercise modules. However, I am teaching on several other modules as well.

In continuation of my recent work on obesity (see publications on Research Gate) in connection with metabolism, appetite regulation and involvement of specific nutrients (i.e. sugar), we currently investigating the contribution of the autonomic nervous system (ANS) balance for appetite and craving. The ANS is the complex nervous system which is regulating bodily functions without involvement of conscious direction. Involvement and importance of the ANS balance for eating behaviour regulation is largely unknown, while the functional involvement of the parasympathetic nervous system, one major branch of the ANS, in appetite regulation is well described. ANS balance is strongly variable depending, as example, on cardiovascular fitness levels and BMI. In former work, we could show that negative energy balance of exercise is fully compensated in obese and lean females (Jackson et al. 2018), revealing that regulation of energy balance related to exercise is intact in both groups. However, our work in relation to perceptual measures of ‘wanting’ and ‘liking’ of food supports a food reward deficiency in obese people (Alabduljader et al. 2018). There are apparent discrepancies between energy balance challenges and how responses to food cues and rewards are integrated into eating behaviour. In a more lay-language explanation of this project, we will investigate why cardiovascular fit people are mostly lean and unfit people mostly overweight/obese. Indeed, the amount of calories burned by exercise is compensated in later food intake by most people; therefore, do not simply explain the difference.

In this project, with multidisciplinary collaboration under my leadership, with physiologist Dr Jonathan Moore (PAWB group, SSHES) and psychologists Dr Stephanie Baines (Psychology) and Prof. Robert Rogers (Psychology), with the PhD researcher Abdelbare Algamode (PAWB group, SSHES), we are investigating how the activation of sympathetic and parasympathetic nervous system contribute to the awareness and response to food cues in sedentary overweight/obese and highly trained lean individuals. In this work, we combine exercise and food cue trials, as well as direct stimulation of parasympathetic nervous system to understand mechanisms of appetite and craving in relation to the ANS balance. Unique technology and design of this work is expected to unravel some of the major mechanism in appetite regulation in connection with obesity and the work will contribute strongly to the field.

A further major current research project led by myself, in a longstanding collaboration with the Pulmonary Department, Ysbyty Gwynedd, including Dr Julian Owen (PAWB group, SSHES), Dr Jonathan Moore (PAWB group, SSHES), PhD researcher Claire Griffith-McGeever (PAWB group, SSHES), Dr Christopher Earing (Ysbyty Gwynedd), Consultant Dr Damian McKeon (Ysbyty Gwynedd), concerns the understanding of the causes and potential treatment of Obstructive Sleep Apnoea (OSA). OSA is a sleep disorder highly associated with obesity and has a very high cardiovascular disease risk; it leads to many problems for daily life, like severe sleepiness and fatigue, depressions etc.. OSA is very frequent in obese population, while affecting up to 6% of the adult population. In recent years, we investigated the influence of obesity related factors (inflammatory and anti-inflammatory factors - collaboration with Medical School Hanover, Department of Pharmacology) for alterations of chemosensitivity in OSA patients (Earing et al. 2019). Currently, we are investigating changes in muscular effort perception (respiratory and motoric system) in OSA patients compared with ‘healthy’ individuals. Muscle systems are differentially affected in OSA (fatigue and hyper-reactivity) and contribute substantially to the severity of symptoms in OSA. With our newly collected data, we hope to explain central and peripheral alterations in the motoric system of OSA patients and their contribution to OSA symptoms. Additionally, we collect data in ‘healthy’ participants to develop a model, which can describe and predict alterations in effort sensation and the involvement of learning processes. The mechanisms of effort sensation are still highly controversial and we expect that our model will contribute hugely to the understanding of mechanisms involved in effort sensation in health and disease (manuscript in preparation). A further project in this collaboration under my leadership is related to treatment of OSA; we currently investigating the feasibility of a remote weight-loss intervention for OSA patients for alleviating OSA symptoms via weight loss, with the support of current MRes student Rachel Granger. The intervention (Programme for Enhanced Eating Behaviour – PEEB) was formerly developed in collaboration with former PhD researcher Mishal Alshubrami and MRes student Matthew Jones (PAWB group, SSHES) (Alshubrami et al. 2017). We expect that the PEEB intervention can lead to substantial weight loss in OSA patients and will be acceptable to be implemented in the treatment scheme in the Pulmonary Department of Ysbyty Gwynedd and others in the future. This work is expected to lead to high impact and grant capture for future patients’ benefits.

Concurrently, a further important research project is now starting to investigate fatigue and effort perceptions in patients with chronic fatigue symptoms. This project is a development based on my former projects with OSA patients but now focusing on further patient groups with major fatigue symptoms. Chronic fatigue is often a major symptom in particular patients groups (RA, OSA, Chronic Fatigue Syndrome, Cancer, etc.) and there is very little treatment available, as well as the understanding of the mechanisms involved is lacking. Based on our effort perception data with OSA and healthy patients, we hypothesize that learning processes play an important role for fatigue symptoms, if physiological reasons are not apparent, like in rheumatoid arthritis (RA) patients with controlled inflammation. We will use our effort perception testing paradigm (manuscript in preparation), developed for OSA patients, to investigate effort and fatigue perception and prediction, moreover, we will adopt our recently established evaluative conditioning protocol (see below) in connection with exercise for influencing effort and fatigue perception in RA patients with major fatigue symptoms. Patients will take part in exercise training programmes, known to alleviate fatigue symptoms, but will be additionally conditioned with associated rewarding stimuli (sweet solutions) during increased physiological loading. A bespoke computer software has been developed by us using heart rate data in connection with a dual syringe system to deliver sweet rewards to participants’ oral cavity depending on the level of heart rate. The project will be performed in multidisciplinary collaboration with Dr Stephanie Baines (Psychology), Dr Jeremy Jones (Peter Maddison Centre, Ysbyty Gwynedd), together with a new PhD researcher (Saleh Elmsmari, PAWB group, SSHES) under my lead. This project aims to influence effort and fatigue perception, to gain better understanding of the mechanisms in chronic fatigue and to treat chronic fatigue.

A further research project under my lead is investigating the perception of exercise in various population groups. Physical activity is commonly very low in industrialized societies with severe negative outcomes for health risks. However, whether exercise is perceived as a reward and whether valuation of exercise can be influenced has not been established. In multidisciplinary collaboration with Prof Robert Rogers (Psychology) and with PhD researcher Tamam Albelwi (PAWB group, SSHES), we use discounting paradigms to measure reward decays of money, exercise and food to understand exercise valuation and factors influencing choices for the health behaviour exercise (motivation, context etc.) (Albelwi et al. 2019). The current project includes also online surveys, where exercise discounting and the involved motives for exercise are investigated in various population groups. Furthermore, we developed a new conditioning paradigm to use sweet rewards, which are linked with the appearance of cardiovascular strain (heart rate) during exercise training, for performing evaluative conditioning. This project aims to influence peoples’ choices towards higher intensities in exercise and to understand choice processes involved in exercise behaviour. Sedentary population tend to choose exercise intensities below the threshold needed for physiological adaptation. Influencing choice behaviour towards higher intensities would increase health benefits of self-selected physical activity for this population group. Currently, additional data are collected to investigate whether the conditioning effects also transfer to performance trials in athletic population. Based on the substantial effects of the conditioning we observed in this project, we also implement the protocol in a research project focusing on effort and fatigue processes (see above).

Potential PhD students can contact me regarding following topics:

1. Influence of exercise and physical activity on appetite regulation.

2. Fatigue and effort perception in health and disease.

3. Exercise perception and its valuation in various clinical and healthy populations.

4. Obesity and its consequences for physiological and psychological responses to exercise and food intake.

School of Human and Behavioural Sciences