Law and Order and Frasier

On the lighter side of scholarship, Professor Stefan Machura, Professor in Criminology & Criminal Justice, published an article this year with his collaborator for many years, Olga Litvinova, Honorary Research Fellow at Bangor University, on conflict and law as they appear in the TV comedy series Frasier. 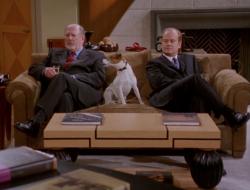 FrasierHere, people laugh about the worst aspects of law and lawyers, but also about the all-too-human misdemeanours in everyday life.

‘Traces of law can be found in all aspects of life, law is ubiquitous. People relate law to some of their most desperate life situations, and sometimes law serves them well. It is no wonder that law features prominently in popular comedies. There also is a tradition to ridicule authorities and social institutions, and the law, courts and legal professionals are no exemption. In order to be understandable and “funny”, there needs to be at least a fleeting familiarity of the audience with them. Popular TV comedies thus offer a unique window into popular legal culture: they show elements of law and aspects of its workings, of the behaviour of lawyers, which the public relates to. For example, previous media coverage, other lawyer television and movies, or indeed personal experience, may have introduced them and something made this information stick, perhaps a rather objectionable practice. “Law” in this context has to be taken in its widest possible meaning as “living law” (Eugen Ehrlich), which means including those non-statutory rules by which society is organized, by which people live their daily lives. A further dimension which lends itself to good entertainment is rule-breaking behaviour, which often testifies for the validity of laws, only that they are inconvenient in certain situations. Again, a constellation that invites mockery, humour and Schadenfreude. The article applies a cultural and socio-legal perspective to the depiction of things legal in one of the most outstanding US television comedies, shown to audiences internationally: Frasier (1993–2004).’