A new study (7th of May) reveals a method to improve the monitoring of the endangered Ganges river dolphin – one of only four remaining freshwater cetaceans since the Yangtze River dolphin became extinct in 2007.

Nadia commented: "I chose to come and study in the School of Environment, Natural Resources and Geography at Bangor University given its reputation as an interdisciplinary research centre. Over the last three years I have met a diverse range of researchers with a broad range of expertise which has meant that I am never short of advice when needed." 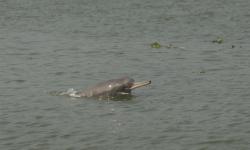 A Ganges River Dolphin: image credit: Mansur/WCS BangladeshThese findings have been published (7th of May) in the journal PLOS ONE. http://www.plosone.org/static/information.action