Best day ever in the history of Aelwyd JMJ

Aelwyd JMJ, the Urdd Aelwyd of Bangor University’s Welsh-medium Halls of Residence, have experienced an excellent Eisteddfod yr Urdd again this year, with the the Aelwyd and its members claiming victories in the main choral competitions.

The final Saturday is known for its high standards of competition between various aelwydydd and Aelwyd JMJ’s presence was clearly felt as they managed to win medals in six of the voice competitions for groups, parties or choirs. 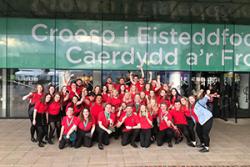 The first prize was claimed by the Aelwyd in the Cerdd Dant group competition, with an arrangement by one of the party members, Elain Rhys, a second-year Music student.

The Women's Party came first under the leadership of Alistair Mahoney, who has just completed a degree in Music, and accompanied by Elain Rhys.

The Men’s Party came first under the leadership of Nerys Wyn Williams with Elain Rhys accompanying again, with a passionate rendition of the patriotic song 'Can y Celt' by Alaw Meinir Lloyd with the words of Peter Hughes Griffiths arranged by Annette Bryn Parry.

Aelwyd JMJ won first prize in each of the choral competitions. This year’s choir leader of up to 40 voices was Steffan Dafydd with Catrin Llewelyn accompanying and they gave a poignant performance in memory of Sioned James, the former leader of Côrdydd.

Steffan Dafydd also led the choir over 40 voices to victory. This is Steffan’s first year as the choir’s leader and the second year Welsh and Music student said:

"Winning the grand slam in Cardiff on a world-renowned stage crowned a fantastic year for the Aelwyd. I sincerely thank everyone for their dedication and hard work, especially to our accompanists, fellow leaders and members of the Committee. We look forward to competing in Denbighshire next year."

As well as victories in the choral and singing parties competitions, one of the University's recent graduates won the Learner's Medal competition. Elena Sciarrillo, who grew up in an Italian-speaking household in Mold, graduated with an MA in English Literature last year. Jack Wilson was awarded second place – Jack is originally from Warrington and studies Chemistry at the University.

Congratulations also to Osian Owen on coming third in the Chair competition, and to Caryl Bryn, who came third in the Crown competition. Both are studying for MA degrees in Welsh with Creative Writing.

Students from the University and Aelwyd also experienced successes in other competitions:

"Aelwyd JMJ continues to deliver success at a national level and the students’ passion is testament to what the Aelwyd, UMCB and Bangor University mean to them. It's been a very special year for the aelwyd and I'd like to personally express my thanks to all those involved."

“We at Bangor University are extremely proud of Aelwyd JMJ. Their success in competition after competition testifies to the talent and commitment of this special group of students.  The rich life of Bangor's Welsh-language community has so many different facets, and what's fantastic about Aelwyd JMJ is that they can display that cultural energy to the rest of the world.”

These successes follow Aelwyd JMJ winning the Best Arts Society Trophy at the National Societies Awards 2019, which was presented at an awards ceremony organised by the National Union of Students recently.