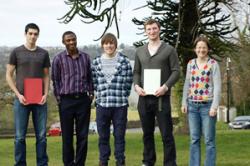 Law students Andrew Jones, Damian Etone, Cathal McCabe and Adam Gulliver will travel to the Netherlands to compete in the Telders International Law Moot Court – the most famous contest of its type in Europe – held at the seat of the International Court of Justice in The Hague.