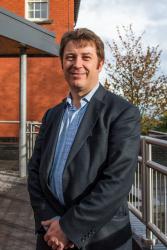 Prof Chris CollinsProf Chris Collins, Head of Bangor University’s School of Music & Media, has been elected President Elect of the Incorporated Society of Musicians.  He will be acting as a member of the Society’s presidential trio until April 2020, when he steps into the role of President.

Prof Collins follows in the footsteps of another leading musician and Head of School, as composer Professor William Mathias undertook the same role in 1989-90.

The ISM is the UK’s professional body for musicians and subject association for music. It plays an active role in promoting the importance of music and protecting the rights of those working in the music profession, and has over 9,000 members.

“I’m very proud to be doing this at a time of unprecedented difficulties for music and the arts in the UK, including ongoing cuts to music education, debates around diversity and dignity, and changes to ways in which musicians receive revenues.

The ISM is without a doubt the most politically active of the Music subject associations in the UK, and is in constant contact with parliamentarians.”