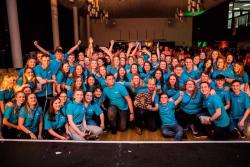 Victorious UMCB members after their win at the Eisteddfod.For the fourth year running, Bangor’s Welsh-speaking students and Welsh learners who are members of UMCB have won the Inter-College Eisteddfod, which was held this year at Swansea University.

Contributing to the final result, University students were successful in the Eisteddfod's sporting competitions on Friday. The women won the football and rugby and came second in the basket-ball competitions. With the men coming second in the rugby and third in the football, Bangor were overall sporting champions. The students were also successful in the main stage competitions including sketch, mime folk dance and step dance, musical choir, men's choir, women's choir and the massed choir. Capping it all, Alistair Mahoney, a student at the School of Music and Media was awarded the Musician's Trophy, while Jack Wilson, a student at the University's School of Natural Sciences won the Learner’s Medal. 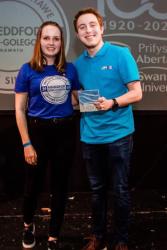 “UMCB has once again managed to bring the trophy back to Bangor, this time for the fourth time in a row. This was due to the hard work and dedication of our students. There is no doubt that Bangor  shone in the stage competitions, with polish and hard work evident in the performances. As President, I have to thank everyone who has been involved with the work. Bangor's well-mannered students were a great credit to the University.”

It has been a busy time for members of the UMCB Choir, as they also competed in the Youth Choir category in the competition and popular television program, Côr Cymru. The Choir appeared  performing on the S4C programme on Sunday 3 March.

The students were also congratulated on their success by Professor Jerry Hunter, Bangor University’s Pro Vice-Chancellor (Welsh Medium and Civic Engagement), who said:

"A Welsh community and sense of Welshness are essential elements of the character of our University. It's great to see the breadth of activities of our Welsh language students and learners of the language reflected again by such a success this year. 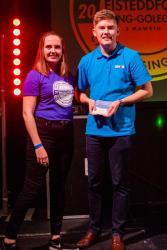 Alistair Mahoney received the Musicians' Trophy from Becca Martin.With almost half of all students studying a degree through the medium of Welsh now doing so in Bangor, following the wide range of degree programs and individual modules available here, it's great that this, in turn, creates a vibrant Welsh community and Welsh culture in the University.”