A Bangor University psychologist has been invited to Hollywood to collect a television and film industry Award. 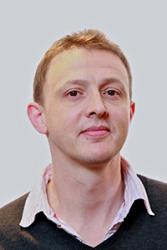 Dr Simon Watt, of the University’s School of Psychology is to receive an Award from the Society of Motion Picture and Television Engineers, the influential global society and technical standards-setting agency for the movie and television industry. The Awards recognise outstanding industry members, and take place at an ‘Honors & Awards Ceremony’ in Hollywood, California on Thursday 24 October.

The Award is for a research paper on ‘Stereoscopy and the human visual system’. The Society requested a paper from Simon Watt and his research colleagues for their Journal. This followed the Society of Motion Picture and Television Engineers’ invitation to present a vision science session on 3D viewing to an audience in New York which included senior figures from movie studios and companies such as Disney and Sony.

“I think this is a nice example of how academic vision scientists can carry out basic research that is relevant to an industry that affects us all, and I am pleased that they recognise the implications for their industry,” commented Simon.

“What I and my collaborators at UC Berkeley (California), Newcastle University, and York University (Ontario) have been doing is looking at how 3D imaging is perceived by our visual system, and some of the challenges it throws up. Although there have been previous 3D movie ‘fads’, we are currently in a period of unprecedented investment in this area and, partly on the back of developments in technology, it is entering the mainstream. But our understanding of the implications of 3D imaging for the human visual system is still in its infancy. The way 3D images are created is not exactly the same as what our eyes see in the world around us, and this can cause problems.  Our research is looking at the problems inherent in 3D imaging, some aspects of which can sometimes make watching these images unpleasant for some people.  We’re ultimately hoping to prepare guidelines for the industry on the optimal presentation of images that will suit most people’s eyesight, and so make the experience more pleasant for all.”

Dr Watt commented: “Sadly, I can't attend, but perhaps I can vodcast my acceptance speech like the movie stars do!”

The SMPTE Honors & Awards Ceremony is being held in conjunction with the SMPTE 2013 Annual Technical Conference & Exhibition at the Loews Hollywood Hotel in Hollywood, Calif. Further details about the event are available at www.smpte.org.