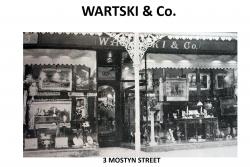 One of Wartski's two Llandudno stores.A map showcasing Llandudno’s Jewish history has been completed by Nathan Abrams, Professor in Film at Bangor University.

The map celebrates the presence of Jews in Llandudno from the late nineteenth century until the present day. It accompanies the earlier map of Bangor’s Jewish history (Walking Jewish History funded by the ESRC Impact Acceleration Account).

The map was produced in cooperation with Gareth Roberts of the Menter Fachwen Walk and Discover Project and Llandudno Museum with the assistance of Bangor University’s Bangor Fund. The Bangor Fund, through donations from the University’s alumni, makes grants that support students and the Welsh language and culture.

Local residents are being encouraged to share their memories of Llandudno Jewry, including those behind the well-known retail outlets, Wartski’s, Blairman’s and Gubbay’s Oriental Stores. 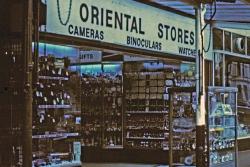 “But as the community has declined and dissolved and our high street has been transformed, not many people know of this history. It’s right there in front of our eyes but hidden in plain sight. This map not only records this history, it also helps you to find it.”

Jews fleeing persecution in Eastern Europe, and wishing to better themselves in Britain, moved to Llandudno in large numbers in the late 19th century. As the community grew, a synagogue and kosher butcher opened.

There was a further influx around the Second World War, both from evacuees and those escaping the Nazis. 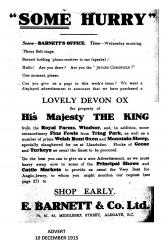 An advert for kosher meat which appeared in the local press.They integrated well into local life, learning Welsh and participating in Eisteddfodau (festivals of music, literature and performance).

They had a transformative effect on the city and are remembered today.

A walk and exhibition are planned for the future when such events can be conducted safely.

Prof. Abrams and Gareth Roberts are now working on an exhibition about the Jewish history of Anglesey funded by the Jewish Historical Society of England.

Prof Abrams hopes the archival venture can be rolled out to cover other places of Jewish settlement in North Wales, namely Colwyn Bay, Rhyl and Wrexham. But that would require further funding.

If anyone would like a free copy of the maps, please contact Prof. Abrams. Via e mail to n.abrams@bangor.ac.uk