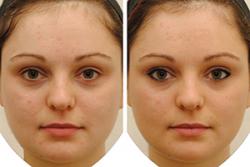 One of the images as used in the research.The idea that cosmetics make you more attractive is all around us. The internet features thousands of tutorials on how to apply makeup, fashion magazines comment on different makeup styles of celebrities, and many women feel they wouldn’t leave the house without it. This simple, day-to-day behaviour has also been the subject of scientific inquiry, with many studies finding that not only are women rated as more attractive with makeup, but also as healthier, more competent, and more likeable.

One aspect of makeup that hasn’t yet been considered is its effectiveness in increasing attractiveness. Simply, how much more attractive does an application of makeup make you? Think about the huge range of faces you see on the way to work every day, or when you go shopping for groceries. There is large variation in the attractiveness of people. Does the use of makeup balance out this variation, putting wearers of makeup on a more even footing with each other?

While at Bangor University’s School of Psychology, Dr Alex Jones, (now at Gettysburg College, Pennsylvania, USA) and colleague, Dr. Robin Kramer of the University of York, recently investigated this question. To do this, they asked participants to rate the same faces with and without makeup, with the restriction that no one person saw the same woman made up and un made-up. If makeup is important for attractiveness, it should overcome the variation in attractiveness between faces easily. But if it contributes little, then the variation between faces could overshadow any benefits of makeup.

The good news was that faces with makeup were rated as more attractive - nothing new there. But when they examined all the variation in attractiveness judgments, they found an application of makeup explained only 2% of this variation. In comparison, the variation between faces accounted for 69%. This was very surprising. It’s perhaps unfeasible for makeup to completely overcome differences between individuals, but the size of its effect on attractiveness is remarkably small. This difference was consistent when the psychologists examined whether the amount of makeup the faces wore had any effect.

What do these results mean? Dr. Kramer, of the Department of Psychology at York, said “These findings show that, while makeup increases attractiveness, it is a very small contributor to attractiveness judgments. In the real world, our judgments of attractiveness are influenced by a large number of factors, and we have shown here that makeup contributes very little.” 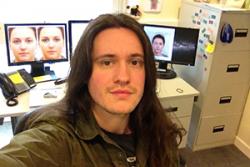 Dr Alex Jones.Dr Alex Jones added: “There are many reasons that women might wear makeup, and one of those reasons might be dissatisfaction with their appearance. Body image concerns are very prevalent in modern society, and we have shown previously that less makeup is considered more attractive. The take-home message here seems to be that, for better or worse, our attractiveness is mostly determined by our natural appearance, and wearing makeup will only have a small effect in comparison.”