Flexible and omnipresent Baboons could be at risk 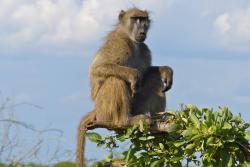 Chacma Baboon (Papio ursinus) female Sunset Dam, Lower Sabie, Kruger NP, SOUTH AFRICA: Bernard DUPONT cc-by-sa-2.0Despite being so commonplace in some regions of Sub-Saharan Africa that baboons can be considered pests to some communities, new research shows that half the six species of baboons present in the region could be at risk by mid-century.

A recent paper in the Journal of Biogeography reveals that baboons, most of which are in the ‘of Least Concern’ category on the IUCN Red List of Threatened Species, could struggle for survival under future climate conditions.

The risk to their survival comes only from considering the effects of human-induced climate change.  If such large, flexible primates can be at risk in such a short time-frame, should conservationists be rethinking how they classify risk categories to include climate effects which have already been set in action?

“What is surprising about our findings is that not only are the majority of baboons not ‘at risk’ currently, (other than one type, the Guinea Baboon,
who are in competition for land with other nearby baboons and classed as Near Threatened), they are considered to be really flexible ecologically 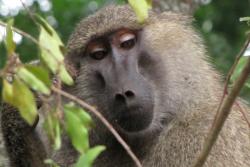 Yellow Baboon (Papio cynocephalus), Serengeti National Park, Tanzania : cc-by-3.0 D. Gordon E. Robertsonspeaking. No one would predict that they would be at risk- they’re opportunists- they raid crops and steal things from tourists. However, what we found was that some of the species would suffer substantial range loss under possible conditions in 2050 and 2070.”

“If species such as these are at risk, then many more could be at significant risk of indirect effects of general, all-pervasive human impact as we enter further into the Anthropocene.”

Dr Kimberley Hockings, Lecturer in Conservation Sciences at the University of Exeter and a member of the IUCN Primate Specialist Group said:

"Up to now research has focused on direct threats to primates, such as the habitat loss and the bushmeat trade. This study underlines the importance of understanding both direct and indirect anthropogenic impacts on primate behaviour and distribution, and suggests future climatic changes should be incorporated into our conservation strategy. We tend to presume that generalist primates, such as baboons and macaques, will fare quite well in the face of most human pressures but this new research importantly challenges this assumption. Let’s hope their intelligence and flexibility provides baboons with the tools they need to persist in a changing world." 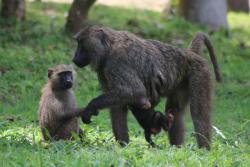 A mother olive baboon, her infant and a juvenile on the grass outside camp in Kibale National Park, Uganda : image by Izzie WinderUnder Izzy’s supervision, Sarah Hill completed the new research as part of her MZool Masters degree in Zoology with Animal Behaviour. Sarah assessed where these baboons could live given twelve different climate change projections of conditions for each type of baboon. Three of the six baboon ‘species’ were found to be at risk.

Sarah explained more about their findings:

“We looked at 2.6 degrees and 6 degrees of warming, under wetter and drier conditions and what we found was quite surprising.  The Chacma or mountain baboons of South Africa were at risk no matter what climate change projections we ran- their population numbers will drop as they lose around 25% of their range. The Guinea baboon is at particular risk if climate changes brings aridification, and the Kinda baboon will not do especially well under any future climate scenario but is especially threatened if the weather becomes warmer and wetter. Two species might expand and one species did not seem to be affected by climate change.”