The Awards were presented by the current High Sheriff, Mrs Marian Wyn Jones, in her first official engagement in her role as High Sheriff. The students were congratulated for giving their time and effort on top of their studies to contribute to the student community and the wider community through their voluntary work.

High Sheriff Marian Wyn Jones said: “It’s a delight to be able to recognise and reward students at Bangor University for the valuable voluntary work they undertake in various roles, schemes and programmes within the local community. Students are volunteering in a wide range of projects and contribute 400 hours of volunteering a week just in the projects with children, young people and the vulnerable in the community.”

The 2013 Individual Winners are: 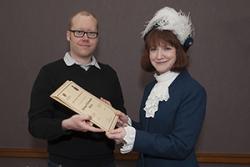 Mike Dixon, a 28 year old Criminology and Psychology student, who comes originally from Billinge near Wigan was awarded £100 in recognition of his work with one of the Student Volunteering Bangor’s Tŷ Newydd project which is run at a Bail Hostel in Bangor.  The project encourages social interaction  and involvement ranges from general conversation, to pool tournaments. Mike’s nomination said that “Mike is a pleasure to work with on the project; he is both a leader and a role model to the men and shows a happy balance between responsibility and fun”. Mike says that he got involved in the volunteering project as he was keen to get involved and meet people when he arrived at University. 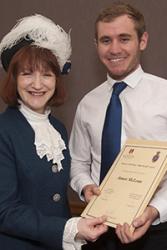 James Mclean, who is studying Environmental Sciences at Bangor and who comes from Kenya is described in the Award nomination as: “a fine example of a truly selfless individual”. For the last two and a half years, Jamie has consistently given his time and enthusiasm for the benefit of many others by volunteering with the University’s Diving Club and offering his first aid skills to other sports clubs and societies. He has voluntarily contributed to his expertise to train over 600 students in usually expensive and difficult to deliver disciplines including scuba diving for the able bodied and importantly, for individuals with learning and physical difficulties. He has also assisted in enabling people to enjoy and experience the outdoors through power. Every weekend during the academic year, Jamie has arranged marine trips to areas within the local community for a huge number of people from within the student and local community.

According to the nomination, “What makes Jamie unique is his infectious passion and drive for providing opportunities for others, always ensuring a high level of safety, organization and participation. He is a polite and infectious young man, liked by all who is truly an ambassador for Bangor and its student community and experience.”  Jamie received £100.

Jamie said that he was “over the moon, it’s amazing, I never expected to be rewarded I’m proud and happy, but there’s also a larger team effort behind it all!” 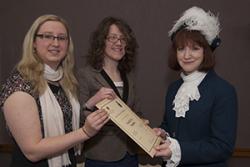 Nightline, a listening and information service, run by students, for students received the Group Award of £300. Nightline coordinators Lucy Bryning and Susan McCandless accepted the Award on behalf of the group. Nightline aims to ensure that every student has access to out-of-hours peer-support in the form of a friendly, non-judgmental listening service. The service is open every night during term time, between 8pm and 8am. The Group provides support to students when few other student services, or friends and family, are available. Volunteers are trained to support individuals dealing with a wide range of issues. Students call Nightline to discuss anything from practical student issues (e.g. exam times and academic problems), to issues around mental health, self-harm and suicide. Nightline are also able to signpost students to relevant information and other University and external services. Nightline currently provides volunteering opportunities for 65 student volunteers who commit to a minimum of eight twelve-hour shifts a year throughout University term time, amounting to over 5,000 hours of volunteering.

Commenting on behalf of Nightline, Lucy said that the money would be well-spent and that “All the volunteers remain anonymous due to the confidential nature of the service. This often results in the volunteers not receiving the same recognition from their peers and the community, as compared with other types of volunteering, so we’re particularly delighted that all our volunteers can feel proud of their achievement and the recognition received today.”