The vast majority of state schools in the UK are required by law to organise acts of daily collective worship (England, Northern Ireland, Wales) or religious observance (Scotland) for their pupils. The majority of collective worship acts during any school term must be of a 'wholly or mainly of a broadly Christian character’, be concerned with ‘reverence or veneration paid to a divine being or power’ and ‘accord a special status to Jesus Christ’. 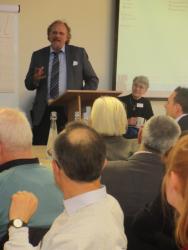 A multidisciplinary research team led by Dr Alison Mawhinney (Bangor Law School) has examined this duty and, at an international conference held this month, launched a report which urgently recommends that governments in the UK re-examine the obligation.

The report, ‘Collective Worship and Religious Observance in Schools: An Evaluation of Law and Policy in the UK’, is the result of a two-year Arts and Humanities Research Council (AHRC) funded project.  The project brought together ten scholars from across the UK, with expertise in a number of relevant disciplines including education, law, philosophy, and spirituality.

The Report strongly recommends that governments in the UK should consider afresh the rationale underlying the duties of collective worship and religious observance in schools. It argues that there is currently no accepted rationale for imposing acts of worship in state schools – and only when one is agreed can an informed debate begin on whether the current duties should be maintained, abolished or amended.

The report recommends that if no rationale can be found for a collective activity in schools, then the current duties should be abolished.

It notes that the different countries in the UK may choose to take different approaches to the question of whether to maintain, abolish or amend the duty in light of the aims and values of each country’s education system.

In addition to urging a fundamental reappraisal of the need for the current duties, the report makes a number of recommendations with respect to the current implementation of the law and policy surrounding collective worship and religious observance.  It recommends that:

Specific recommendations for England, Northern Ireland, Scotland and Wales, in regard to collective worship/religious observance, are also made in the report.

In addition to the presentation of the Network’s report, the conference included responses to the report's findings and recommendations from governments, educational stakeholders and academics.

The report and further details of the research project can be found at: http://collectiveschoolworship.com/