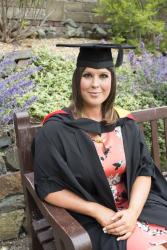 The former Coleg Menai student said: “If feels absolutely unbelievable! I was diagnosed with cancer at 14 so I missed out on a lot of education, particularly GCSE’s and A-Levels, so I was unsure about which route to take career wise.  Eventually, after several years working and as my father is a retired police officer, I knew I wanted to pursue a career in law and applied to Bangor. As my law degree progressed so did my passion for commercial, contract law and tort law. Graduating with a 2:1 is a massive personal achievement as I went through so much in my teenage years but I miss University already.

Saran added: “I am local but I chose Bangor because it has a great reputation, especially the Law School, and it has great facilities such as the library and IT services and the scenery is fantastic. Bangor is one of my favourite Welsh cities.

“During my time at Bangor, I was involved in the Innocence Project which is a public policy organisation dedicated to exonerate wrongfully convicted criminals; which ultimately prevents injustice in the legal system. I was also extremely lucky to be involved in work experience with local law firms, which has helped a lot putting theory to practice.

“I was also involved with the Law Society, which organises various talks and trips, including a trip to London in which I had the opportunity to observe the Houses of Parliament.

“The highlights of the last three years include the trip to the Houses of Parliament, the open lectures hosted by the Law School and finally finding out my degree classification; a 2:1 with honours.”

About the future, Saran added: “I have plans to get enrolled on the LLM Legal Practice Course in September, which is 10 months. I will also aim to get a training contract with a large commercial firm and become a commercial solicitor.”