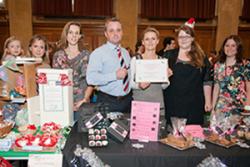 Rebecca Smith and Becky Rigby won prizes for best stalls, sponsored by the BEA team. The two joint winners won £50 in vouchers, as judged by Mari Roberts from the BEA and Chris Little, Head of the University Careers Service.The B-Enterprising team at Bangor University hosted the fourth successive Student Christmas Market in PJ Hall  before Christmas.

Around 120 students took part in the running of over 60 stalls with over 1700 visitors attending over the course of the day. Some of the participating students had taken part in the supporting workshops on ‘How to Price’ and ‘How to Sell your goods or Service’ which was run by a lecturer trained in the Mary Portas School of Retail. This was particularly evident in the high quality and variety of goods on sale as well as the presentation of goods and the stallholder interaction with visitors.  Goods on offer included jewellery, knitted and crochet goods, international foods photography, paintings and plants to name just a few.  the organisers were especially pleased that a number of stalls this year had a Welsh theme or used locally sourced materials so students had given careful thought to sustainability of their products. Santa’s Grotto was again present and was very well attended by staff and students. Stallholders will have earned 15 BEA (Bangor Employability Award) xp for running a stall and further points through participating in the supporting workshops.

Katherine Browning who was running a jewellery stall said: ‘We saw lots of pretty things, sold lots of pretty things, and I attempted to make pretty things. I have yet to count up what we've raised for Macmillan Cancer Support so far, but I just love that I could share my hobby and passion with so many people’. Cat Bullock another stall holder said of the event: ‘It was great – getting the word out not only to students but the community too’.

Live music provided by Bangor University Brass Band and the Bangor University Folk Society throughout the afternoon added to the festive feel. Turkey and nut roast rolls and mulled wine were on sale from ‘Bwyd@Bangor’.

Many stallholders donated some of their profits to charity. Some of the charities set to benefit are Macmillan, the Dystonia Society, the League of Friends in Ysbyty Gwynedd, the RSPB and many more.

Many of the Students' Union Clubs and Societies also held stalls to raise money for their society budget, including Athletic Union, Geographical Society, HogSoc and the Photographic Society.

Some students who are selling at the market are already running their own businesses. Follow up support in the form of one to one mentoring and workshops are available to all stall holders other students to develop their ideas through the B-enterprising programme. Please email

The Market is currently funded via the Welsh Government through the Regional Hub partnership between Bangor University and Grŵp Llandrillo Menai and the organisers were delighted to have had two stalls included run by Grwp Llandrillo Menai students and their tutors.

The B-Enterprising team would like to thank everyone who gave their support during the day including the student helpers, the Estates team for behind the scenes team in helping set up, Food@Bangor for helping out with refreshments, the BEA team for sponsoring the best stall and recognising the worth to the students in awarding xp points, Welsh Government for providing the funding, and most of all to the student stallholders themselves for their enthusiasm, for putting so much effort into creating their products and for being enterprising!