The Crown for Guto 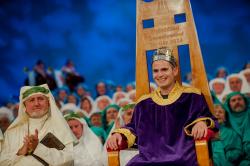 Congratulations to poet Guto Dafydd, a former student of the School of Welsh, who won the National Eisteddfod Crown in Carmarthenshire this year!

He received the accolade at a special ceremony on the Pavilion stage on Monday 4 August. At only 24, Guto is one of the youngest poets to ever win the Eisteddfod Crown.

In a field of 32 competitors, Golygfa Deg came out on top for his sequence of 10 free verse poems of no more than 250 lines on the theme ‘Tyfu’ (Growing).

Delivering the adjudication on behalf of his fellow judges, Marged Haycock and Dafydd Pritchard, Dylan Iorwerth said, “Writing about Wales today whilst describing the Wales of yesteryear. And this is the beauty of these poems. There are many kinds of ‘growing’, the birth of a baby, the growth – or lack of growth of a nation, the sub-story about the growth of a relationship between two people and, at the end, a suggestion that we can grow beyond our current predicament.

“These are the poems of today. Some relate to events this year. Within a year or two, some will need an explanatory footnote, and some people may see this as a weakness. But we’re adjudicating the competition this year. And Golygfa Deg sets today in the eerie background of hundreds of years of history.

“Imagine setting the Radio Cymru and Eos troubles alongside an old poem about the hanging of the harpist Siôn Eos under English law. Think about placing the Aberystwyth storms next to the wind and rain from the eulogy to Llywelyn ein Llyw Olaf, the Porthmadog by-pass with Dafydd Nanmor and his ‘hiraeth’ for his girlfriend. Blodeuwedd and the Trawsfynydd Nuclear Station – our intuition and the power of the splitting of the atom.

"As these things come together - and because of the writer’s technical mastery and confidence in the treatment of language and tone – much more goes on. It is an explosion of meaning and its aftershocks continue long after the end of the poem.

"In the end, the big decision was not hard at all. This is the 2014 Crown and it is awarded to Golygfa Deg."

Originally from Trefor, Guto Dafydd now lives with his wife Lisa in Pwllheli. Educated at Ysgol yr Eifl, Ysgol Glan-y-Môr and Coleg Meirion-Dwyfor, he graduated in Welsh from Bangor University, where he completed a dissertation on the work of Wiliam Owen Roberts and Iwan Llwyd. He now works for the Research and Analytics Service at Cyngor Gwynedd. He is indebted to his family and to teachers and his many friends for support and inspiration.

He competed in eisteddfodau, both large and small, for many years, succeeding to fill his grandmother’s dresser with the occasional trophy and chair. He won the Urdd Eisteddfod Crown Pembrokeshire in 2013, after several disappointments, and came close to winning this competition last year in Denbigh.

He is an enthusiastic ‘Tweeter’, a member of the Talwrn y Tywysogion team and the Caernarfon Ymryson team, and enjoys reading, lecturing and writing reviews. He is a columnist for Y Glec and a regular contributor to Barn, Barddas, Tu Chwith and other publications. His exciting detective novel for young people, Jac, has just been published by Y Lolfa, and his first volume of poetry will be published by Cyhoeddiadau Barddas in the spring of 2015.

The Crown and the financial prize are both presented by Carmarthenshire County Council. Local artist, Angharad Pearce Jones, is responsible for this year’s Crown.

The design is in the form of a tree, growing from the front of the Crown towards the back. The inspiration came from the story of Merlin’s tree, which gave the town – Caerfyrddin – and the county their Welsh names. Although made from industrial material, the artist wanted to ensure that the Crown looked beautiful, decorated and valuable.

The ‘Cyfansoddiadau a Beirniadaethau’ which includes the full adjudication for this competition, as well as details of the winners of all the Eisteddfod’s composition competitions, will be available to buy immediately following the Chairing Ceremony on Friday afternoon.

For more information go to http://www.eisteddfod.org.uk/english/.