When did the people of Wales become Welsh? 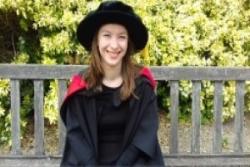 Dr Rebecca ThomasIt’s Rugby World Cup season, which means that expressions of Welsh identity are broadcast on the big screen for the world to see. But, amidst the singing of the anthem, the dragons and the daffodils, do you ever wonder when people began to consider themselves as Welsh, and their country Wales?

Most historians agree that a sense of Welsh identity was in existence by the twelfth century, but we don’t yet know when exactly this developed and why. Medieval historian Dr Rebecca Thomas thinks that suggestions of a Welsh identity can be found as early as the ninth century.

Rebecca has been awarded a prestigious British Academy Postdoctoral Fellowship to research the development of Welsh identity in the Middle Ages – when do we find references to an idea of Wales and the Welsh, and why.

She will be turning to medieval Latin chronicles and histories to find evidence for how Welsh identity was constructed, and will also be looking to the wealth of evidence from the surviving writings of the Welsh poets, to see how they described the country and its people.

“I’m interested not only in when the Welsh emerged as a people, but why that is,” Rebecca explained.

“The early Middle Ages, especially the ninth and tenth centuries, was a key period in the construction of identities. If you look at the chronicles and histories being written in this period, they are preoccupied with dividing the world into different peoples and pinpointing origins for these peoples. Medieval writers claimed, for example, that the Welsh had come originally from Troy. Envisaging Trojan origins for a people was an idea that was highly popular on the Continent – the Franks also saw themselves as descended from the Trojans, for example – and so Welsh writers were tapping into a much broader phenomenon. It seems likely, too, that they were very much aware of how texts produced in other parts of Britain were beginning to talk of England and the English.

I want to ask how important contact with the wider world was in shaping Welsh identity in this period, and to think about what Welsh writers thought set the Welsh apart from other peoples. What made the Welsh a people in their eyes? ”

When Asser, a scholar from St David’s, writes in 893 that the eighth-century king Offa had built a dyke between Mercia and Britannia from sea to sea, for him Britannia is Wales, a geographical unit defined by Offa’s dyke. When Nennius, a ninth-century scholar from Gwynedd, includes place-names in both English and Welsh in his Latin text, he refers to Welsh as ‘our language’. Ideas of a shared language, history, culture and territory are thus all important factors that need to be considered.

Dr Rebecca Thomas is one of only 53 early career researchers to be awarded a British Academy Postdoctoral Fellowship and is the second person ever to be based at Bangor University with this award. She joins the University’s School of History, Philosophy and Social Sciences from Cambridge University.

She added:
“I’m delighted to be joining a School with such a long tradition of expertise in medieval Welsh history, and am excited to be working as part of an academic community that has contributed so much to our understanding of Wales in the Middle Ages. I am looking forward to sharing my research with the academic and wider community.”

“I am so pleased that Rebecca Thomas has joined us in Bangor. Her receipt of this highly competitive British Academy fellowship is a recognition both of her outstanding achievements as an early career scholar and of the University’s strengths in medieval Welsh history.”