Bangor Scientists in the Indian Ocean

One of the deserted Chagos Islands.Scientists from the School of Ocean Scientists are part of a 14 person expedition currently on a ship in the British Indian Ocean Territory (BIOT) studying the biodiversity of the World’s largest Marine Protected Area.  Drs John Turner and Ronan Roche are working with British and American scientists in an archipelago of uninhabited and remote atolls located south of the Maldives.  The Chagos Marine Protected Area was 4 years old on April 1st and is an Ocean Legacy Reserve  of strict protection, covering 640,000 km2  and contains many of the best coral reefs in the Indian Ocean.  The team and their equipment arrived at the USA Naval facility in Diego Garcia on 25th March, and boarded the BIOT patrol vessel, the Pacific Marlin for 3 weeks of scientific diving operations around the northern atolls.  This may seem idyllic, but so far, conditions have been extremely demanding with rain squalls, 50 knot winds and huge waves to contend with.  The team are currently sheltering in the lee of some coconut islands.

‘We have now got into a good routine, but every day brings it challenges’ explains John Turner.  We often awake to the ship’s anchor chain clanking its way to the seabed, and have an early breakfast in the mess before gathering on the rear deck as the sun comes up.  The diving equipment is prepared and the ship’s crew hoist our 5 inflatable boats over the side for the days activities.  One boat will usually venture to the islands with a team to study the bird populations and vegetation, while the other 4 will be used for diving on the seaward reefs of the atoll’. 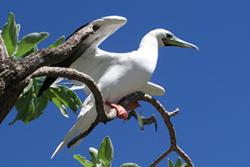 Red-footed BoobyMany of the islands harbour internationally important populations of birds such as red foot booby, sooty and fairy terns and shearwaters. The bird populations are best on those islands which still possess some original trees rather than the ubiquitous coconut palms which are so dense that they lean out over the water, and of course on islands that do not have rats.  Coconut crabs are abundant - up to half a metre in length, and these formidable creatures climb the trees to rob coconuts.

John continues ‘We are often joined by pods of dolphins which leap and spin in the wakes of our boats as we make our way through the passes in the reef to the dive sites.   Here, a shallow narrow terrace of coral reef gradually steepens to a wall which plummets many kilometres.   Atolls are formed by coral reefs growing on submerged sea mounts, and result in a ring of coral surrounding a deep lagoon bordered by great depths.  A few days ago, we visited Blenheim which is completely submerged – it is quite an experience diving a coral reef from a 4.2m rubber boat with no land in sight, and the support vessel just visible on the horizon!  After safety checks, pairs of divers descend down the reef, nearly always being inspected by silver tip sharks as we go.  These inquisitive animals never leave us, often creeping up behind as we conduct our surveys.  A second dive is completed after lunch, usually in the lagoon of the atolls, which have spires of coral extending from the lagoon floor to the surface.  Early evenings are filled by compiling data, and on most nights, one of the team gives a seminar in our very special seminar series at sea.

One of the most important functions of the Chagos Marine Protected Area is that it serves as a reference site to measure change in the absence of direct impacts from human populations.  However long term changes can be difficult to assess, especially if those scientists measuring the changes also change over the years! By recording what the reefs look using underwater video, it is possible to compare sites across years. 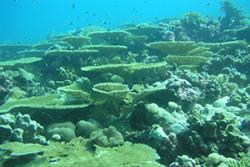 Some of the reefs off the Chagos Islands.Dr John Turner says: "Each day, Ronan Roche and I are selecting coral reef sites which I first visited in 2006. Our aim is to dive a similar profile and record on video what the reef looks like today, and to be able to compare these observations with those made in 2006. The video records are being carefully filed so that they can be compared in future years as well."

Coral cover on Chagos reefs has been assessed for more than 20 years, providing a valuable long term record of change over time in response to major environmental variables, such as  warming events and bleaching induced mortality. Although photographs of many reef communities exist, these have been taken selectively and do not really present an objective record of the state of the reefs. High resolution video recorded across wide tracts of reef can show the state of that reef. A video archive of the structure of communities allows documentation of change and the identification of features that may not previously have been recorded in counts because their significance was not evident at that time.  It also enables new generations of scientists to revisit reefs visually, and the video can be reanalysed to identify changes and to address questions of resilience and response.

10 minute sequences of video are being recorded over 5 m depth intervals on both seaward and lagoon sites, and these will be compared with video recorded in 2006.   We are already noticing that many of the shallow table corals that grew rapidly at shallow depths following the 1997 mortalities, and were very prevalent in 2006 and now being replaced by a more diverse range of species, which can be expected to increase in biomass in subsequent years unless affected by further impacts.  Many table corals appear to have died and are being dislodged by water movement and are falling down the reef slope.  Last year, we saw that corals below about 15m depth in Salomon lagoon had died, probably due to warm, dense water at depth, and low circulation due to the reefs that surround most of the atoll. We have been delighted to see recovery of many of these corals in just 12 months.   Some sites displayed damage from plagues of the Crown of Thorns starfish, and we are now eager to revisit these sites to see whether they have recovered too.   Such fast recovery shows that the coral reefs of Chagos are very resilient, and this is almost certainly because there are no direct impacts from humans.

The research is funded by a Darwin Initiative grant to Bangor, lead by Dr John Turner in collaboration with the Zoological Society of London and University of Warwick, working in partnership with the British Indian Ocean Territory Administration of the Foreign and Commonwealth Office and Chagos Conservation Trust.   The scientific expedition will run until 16th April.  A blog by all members of the expedition can be found here.